It's time for part five of our behind-the-scenes look at the production of the recent road safety commercial that Java Post Production made with Phoenix Group for SGI (Saskatchewan Government Insurance). See the Related Project Video to watch the finished commercial.

We're inside the Canada Saskatchewan Production Studios in Regina, shooting against green screen backgrounds. In this particular set-up, we're recording a super-slow-motion shot of a child's sippy cup and container of cereal snacks (Cheerios, to be precise) hitting a car dashboard.

Back at Java Post Production, this shot will be combined with other green-screen elements in the commercial's final climactic collision scene. 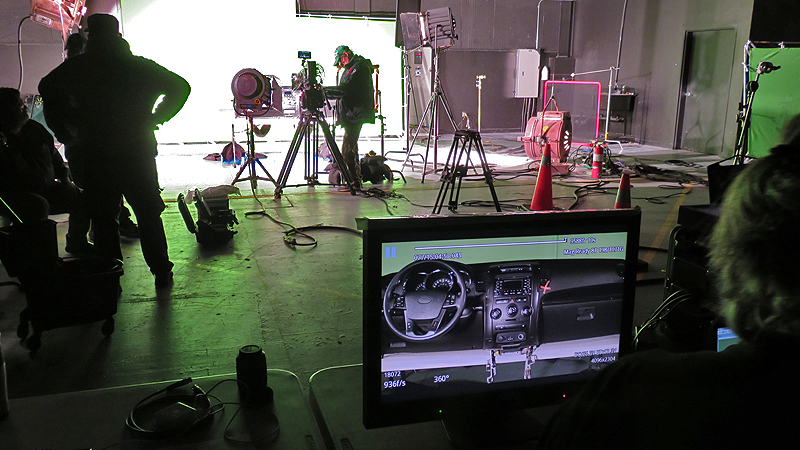 It's lights...camera...and a whole lot of other stuff filling up a section of the Canada Saskatchewan Production Studios, as the crew prepares to shoot. It's a custom-made mega-slingshot, created by this guy: props master and special effects technician Jay Robertson. You may remember Jay from a previous post as the guy who was shooting our actor with an air cannon. He gets all the fun assignments. Jay gets ready to slingshot a sippy cup of juice and a container of Cheerios at our car dashboard. Given the oversized nature of Jay's custom-made mega slingshot, those Cheerios might go right through the dashboard. This is a far cry from the early proof-of-concept tests. The playback shows we're getting good cereal splatter, but we can do better. Let's set up for another take. Now here's some of the show business glamour they never tell you about... ...sweeping up all the scattered Cheerios. This is why feature films have job titles like "first assistant Cheerios wrangler" in the end credits. Jay winds up for another mega-slingshot blast at the car dashboard. The sippy cup and Cheerios container, captured in mid-flight. Luke and Stephen review the take. Hmm. Looks like we're a bit off target. We need to aim a little more left. Stephen and Jay discuss the finer points of sippy cup ballistics. In this business, crew members need a surprisingly wide range of knowledge. You never know when the ballistic properties of breakfast cereals may come up in conversation. Abandoning the mega-slingshot, Jay decides to launch the Cheerios and sippy cup the old fashioned way: by throwing them like a spoiled child. We imagine this was just how it was done back in the early days of Hollywood. And here's how it looked on the slow-motion monitor. And, after many attempts, lots of chucked Cheerios, and litres of spilled juice, here is how the final take looked in the finished commercial, when layered together with separate shots of our mother, daughter, seat backs, and exterior background.

Stay tuned for part six of our behind-the-scenes coverage of the making of the SGI Road Safety commercial.