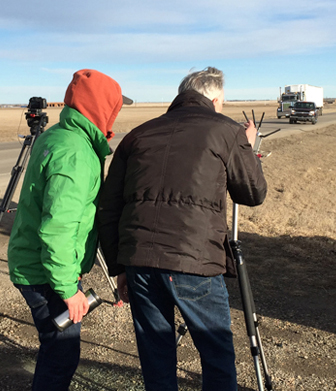 Welcome to part two of our behind-the-scenes look at the production of the recent road safety commercial that Java Post Production made with Phoenix Group for SGI (Saskatchewan Government Insurance). See the Related Project Video to watch the finished commercial.

Prior to moving into the Canada Saskatchewan Production Studios in Regina for two days of shooting, director Stephen Hall and the Java Post Production crew spent a day shooting exterior vehicle shots on a controlled section of roadway.

Some of the exterior shots are to simulate a sleeping driver leaving his lane and causing a head-on collision, while other shots would be used as background visual elements for the in-studio shots of our actors. 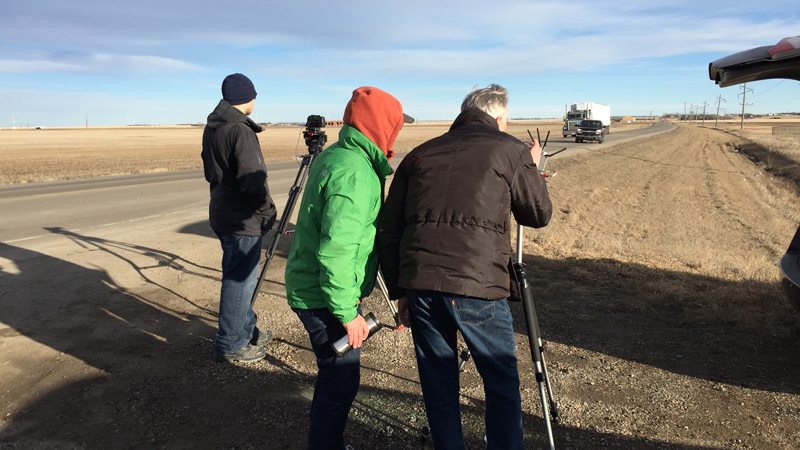 Looking through a remote monitor, director Stephen Hall (in brown coat) watches as a truck driven by a stunt driver slides over into the wrong lane of the road, while a semi-trailer follows close behind. This section of road was closed off for our use, so we could safely get the shots we needed. After all, this is a commercial for safe driving. 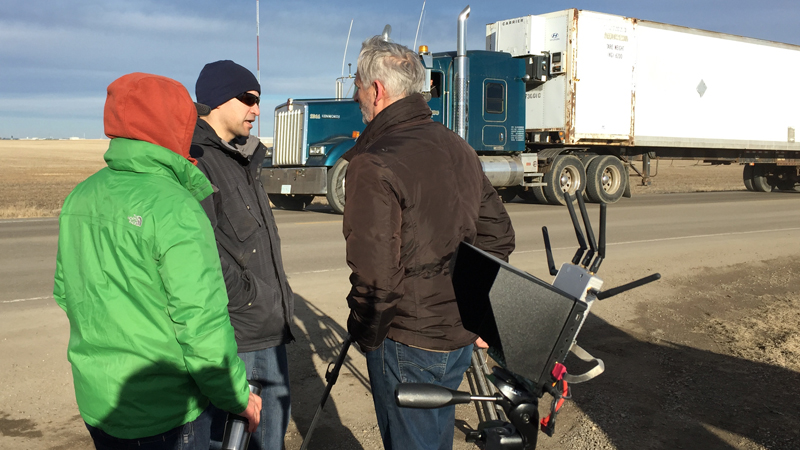 Jack Tunnicliffe (in green jacket) and Randy Shumay (in sunglasses) talk with Stephen between takes. For these shots, the camera is locked in a fixed position. We'll shoot vehicles going both directions on the road. First we'll shoot the truck and semi-trailer coming toward the camera and the truck going into the wrong lane. Later, we'll record a separate shot of a car going away from the camera. 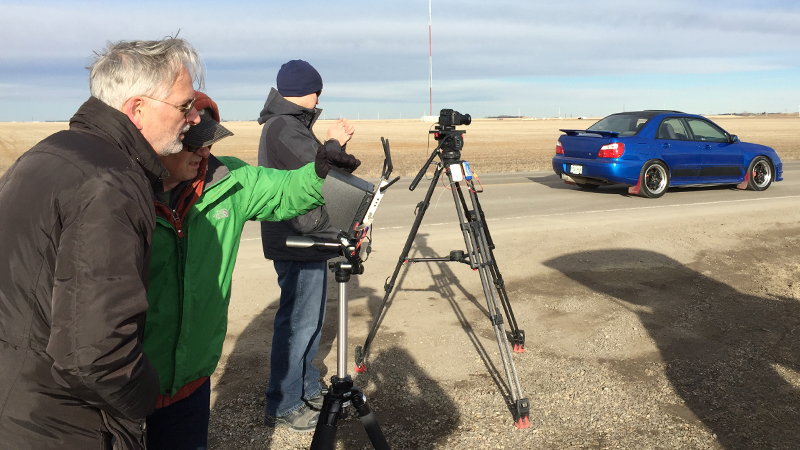 Stephen and Jack Tunnicliffe watch the monitor as we record this blue car heading away from the camera. It will look like this car is heading straight towards the truck we shot earlier. Back at Java Post Production, we'll combine those two images into one, so it will appear that the truck is about to hit the car. That's one way to film a car crash, without actually filming a car crash. 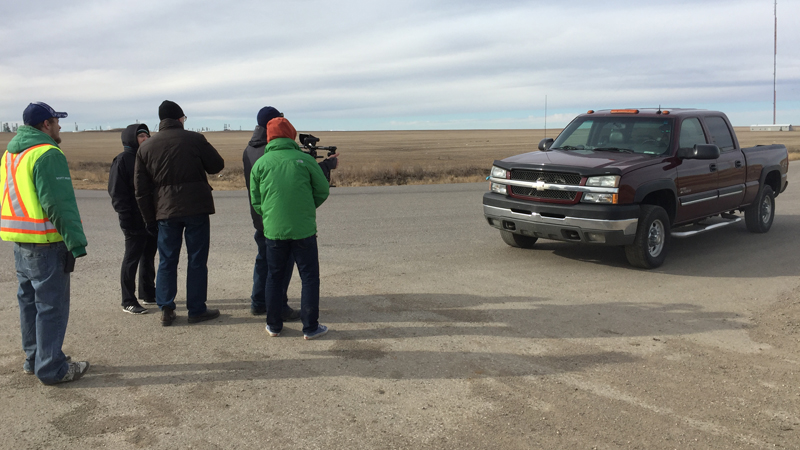 As mentioned earlier, some of the exterior shots were needed as background visual elements for the upcoming studio shots. Here, we're recording a truck coming right at the camera. This shot will later be combined in post-production to look like it's crashing into the side of a car driven by one of our actors. 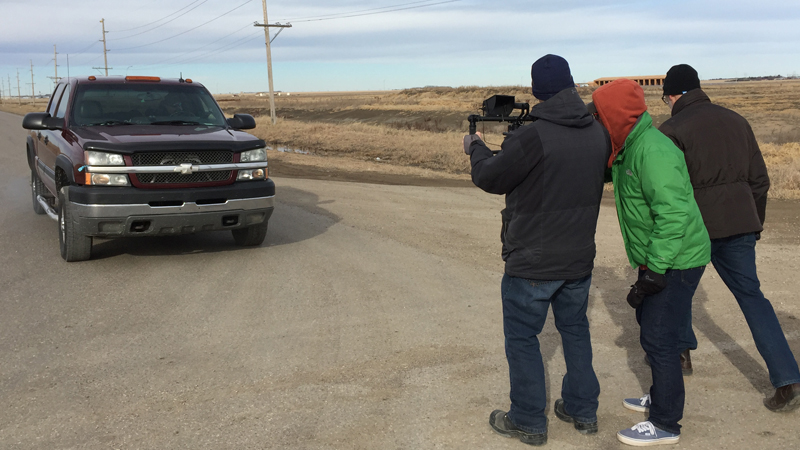 Although we're shooting in slow-motion, we want the truck to race up close the camera. But that might make our camera crew nervous, so we do this backwards. 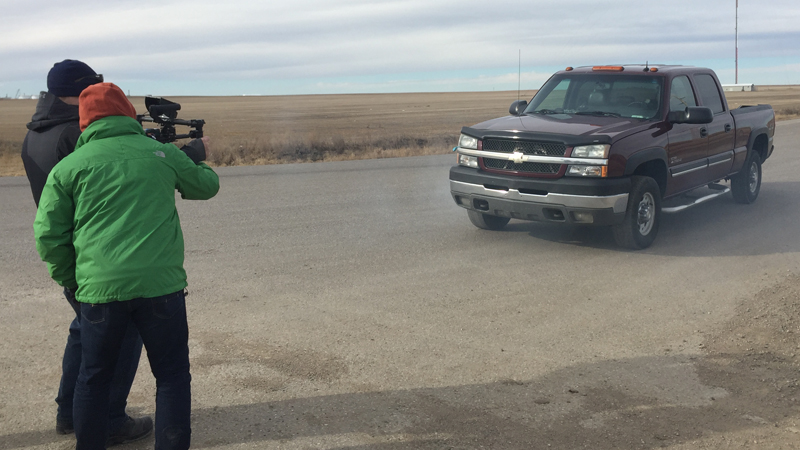 We start with the truck close to the camera, then we have the truck back up quickly, heading away from the camera. 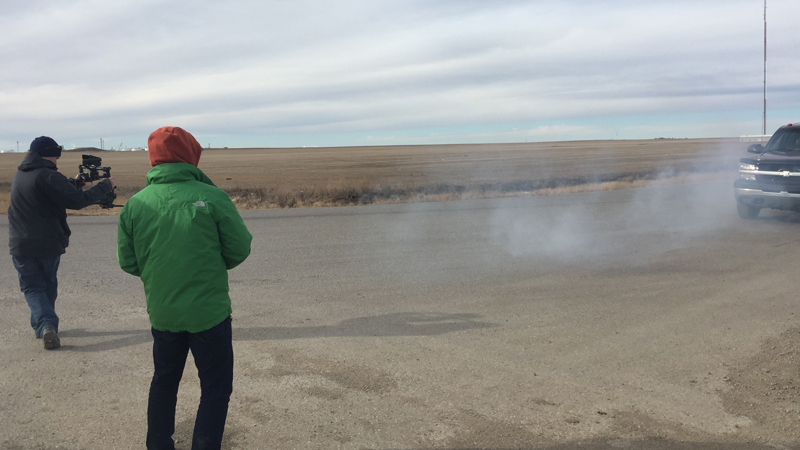 When we run this footage in reverse, it'll look like the truck is about to crash through the camera. The final shot will only be in the commercial for a second or two, but that will be enough to create a powerful crash image. 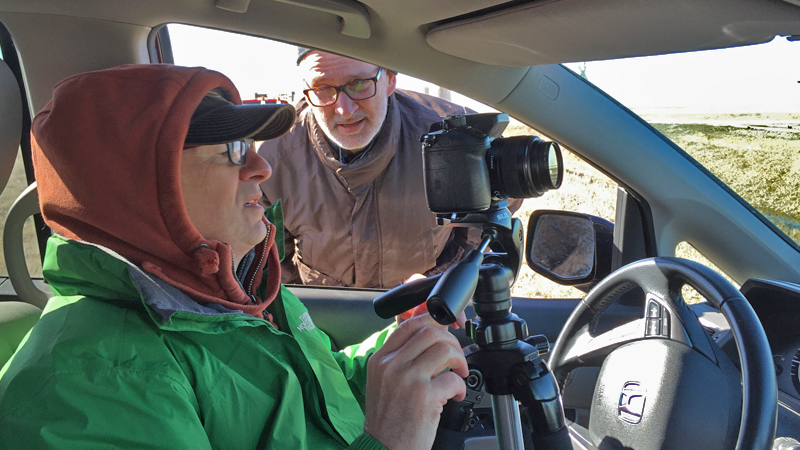 Leaning in through the window, Stephen discusses some other background element shots with Jack. Or maybe Stephen is asking Jack if he wants his window washed. Directors have to have many talents.

Stay tuned for part three of our behind-the-scenes look at the making of the latest SGI road safety commercial, as we move inside the Canada Saskatchewan Production Studios with our actors.