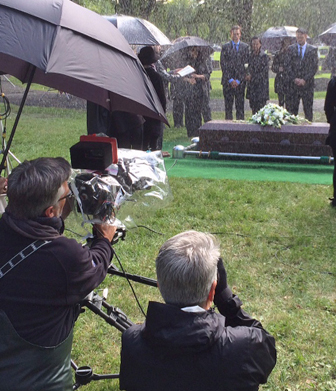 Directed by Lowell Dean - and with script and creative direction from Groovetime Creative and Phoenix Group - this 30-second commercial promotes SGI's "Heads Up" campaign, warning the viewers of the fatal danger of texting behind the wheel.

The primary shooting location was a rain-soaked cemetery. Luckily, our director, Lowell Dean, is also the director of the horror features WolfCop and 13 Eerie, so he's completely comfortable working in rather unsettling locations.

This production also required the delivery of a coffin to the Java Post offices. You can read all about that unusual office delivery HERE.

Let's take a look at a few behind-the-scenes images from the shoot. 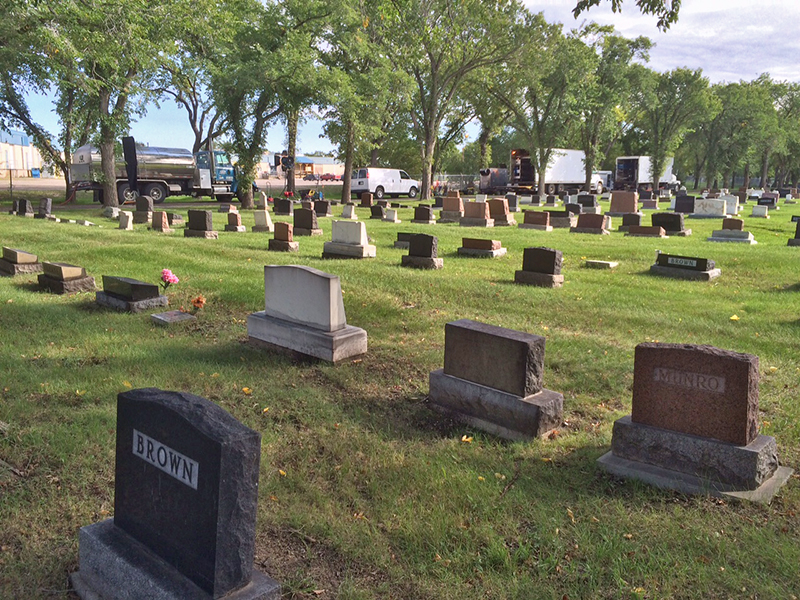 The production trucks roll up to to the primary shooting location. It's a beautiful and sunny but, by the time the commercial is completed, Java Post Production will have it looking like a grim, rainy day. 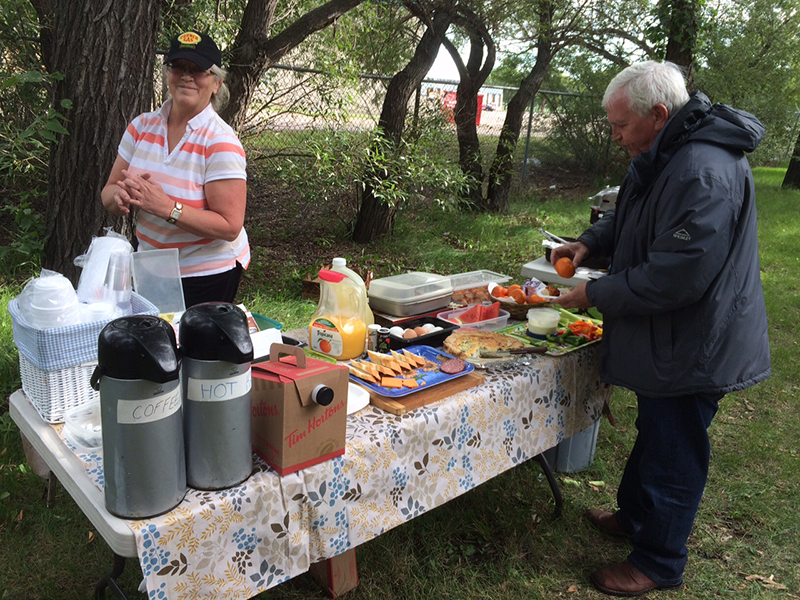 And what's a funeral without some snacks? The craft services table is the first thing to get set up, since it's going to be a long day for the cast, crew, and clients on set. 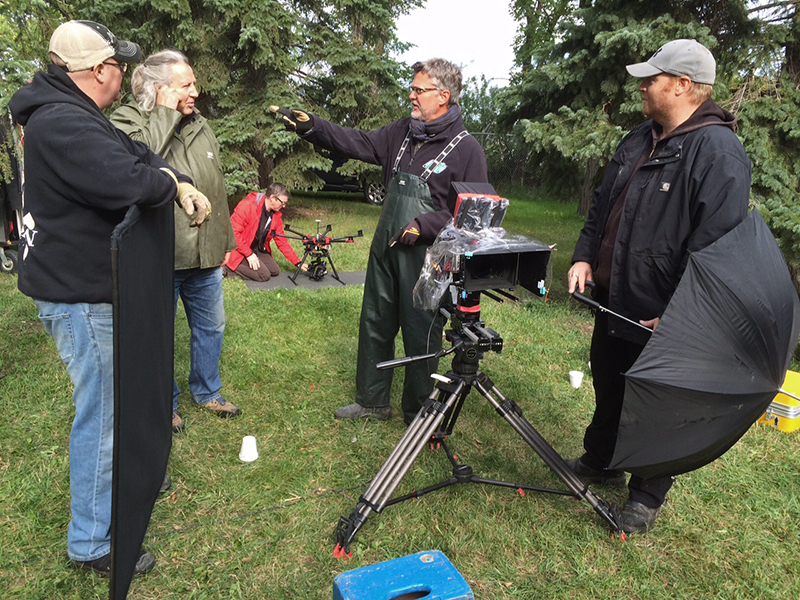 You'll note the umbrella, the plastic wrapped around the camera, and the waterproof overalls worn by Layton. Those will all come in handy in a just a few minutes. 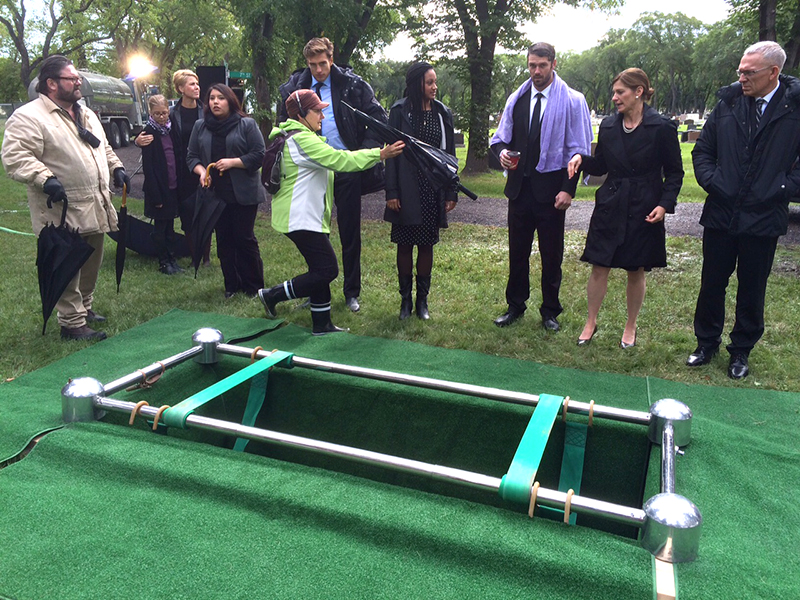 Java Post producer, Joan Speirs (in green jacket), hands out umbrellas to the cast as they gather around the freshly excavated grave. And no, this wasn't anyone's actual grave. It was temporarily excavated strictly for our commercial shoot. No one will get to use this grave afterwards and put "As Seen On TV" on their headstone. 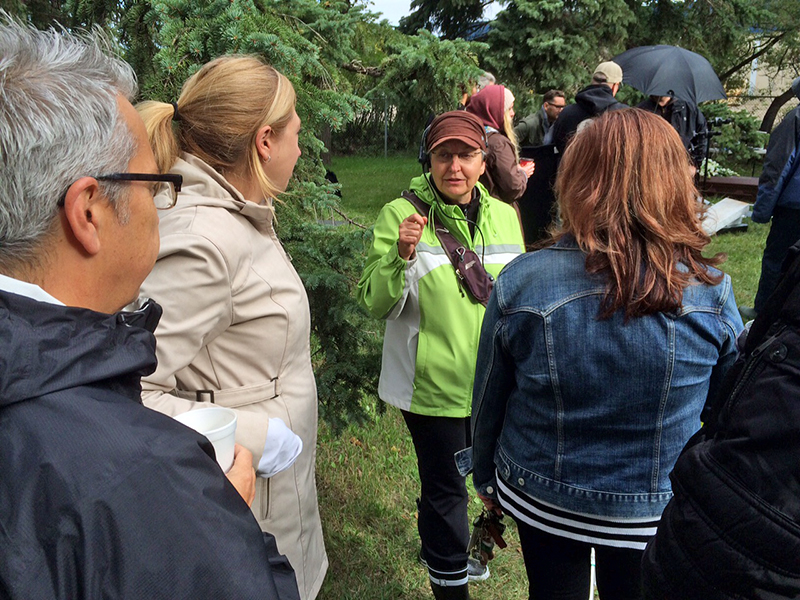 Here's Joan (middle) talking with the client and ad agency representatives, probably warning them not to fall into the open grave. 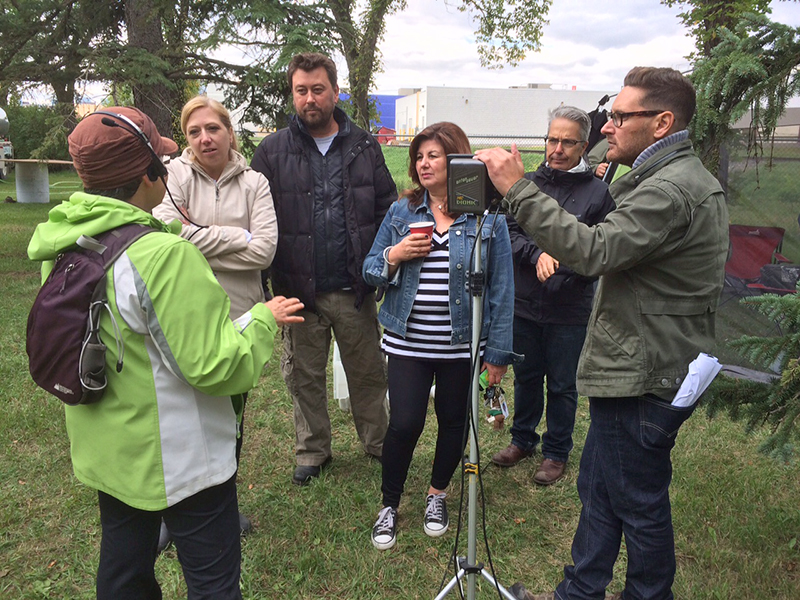 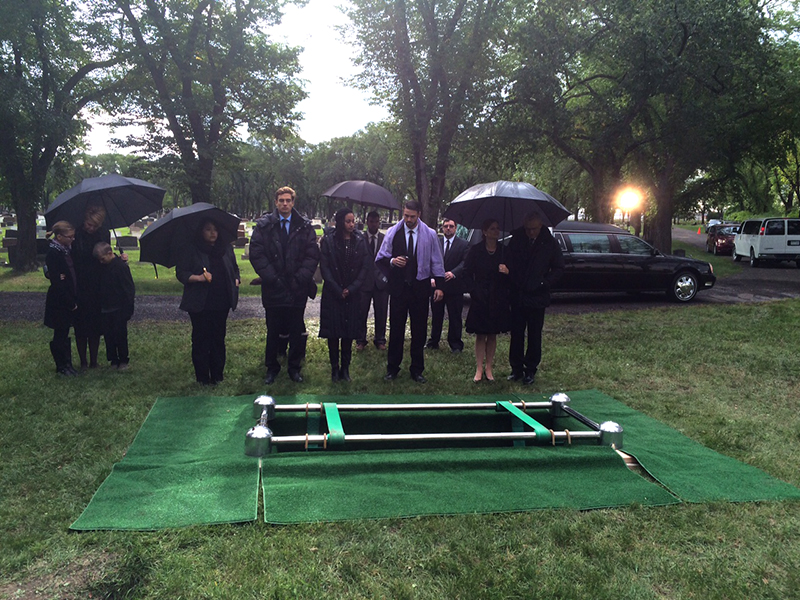 The cast gets into position at the grave site and the hearse is positioned in the background. We'll remove the purple towel before we start rolling. 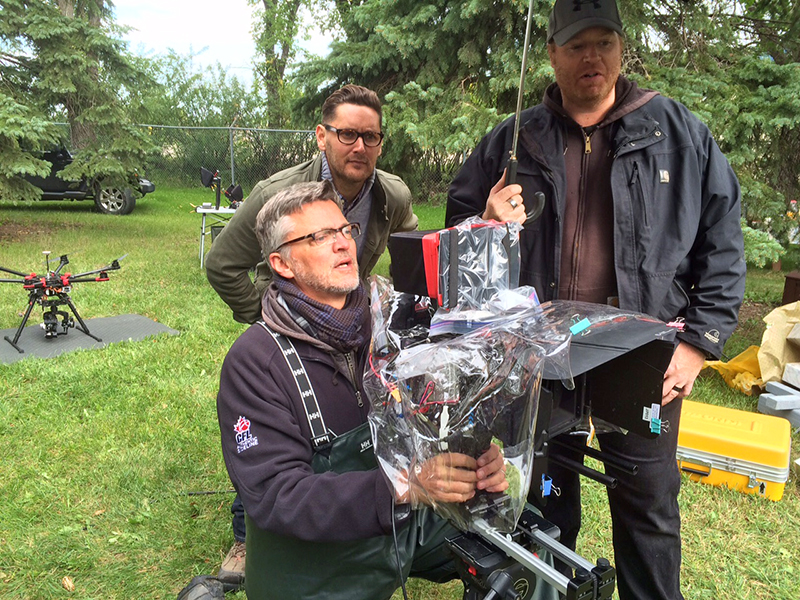 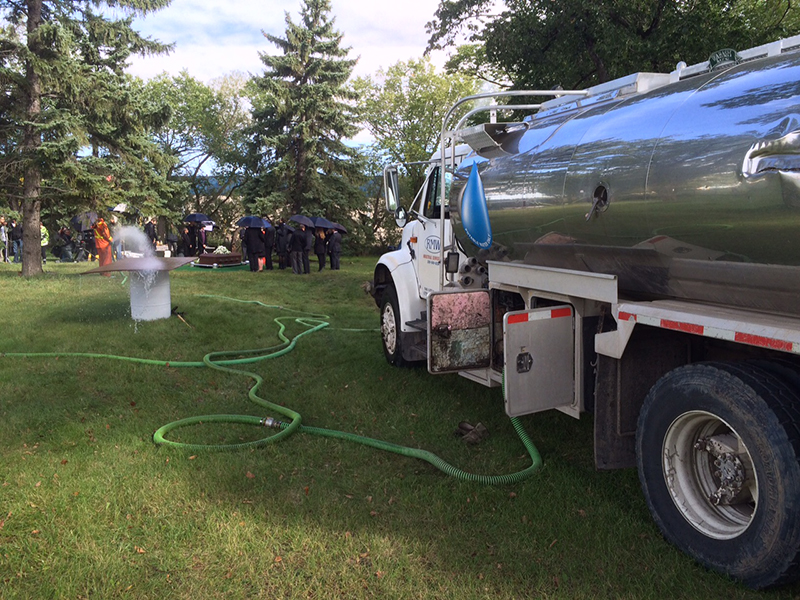 If anyone feels a little thirsty, this water truck ought to do the trick. 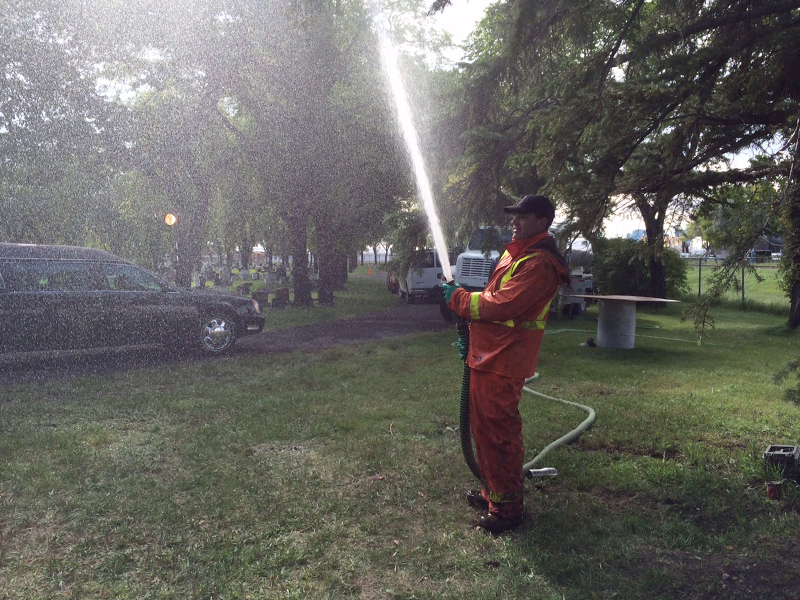 Remember when you were a kid and you would drink straight out of the garden hose? Don't do that now. You'll spend a week looking for your lips. Our water truck operator is here to make it rain. 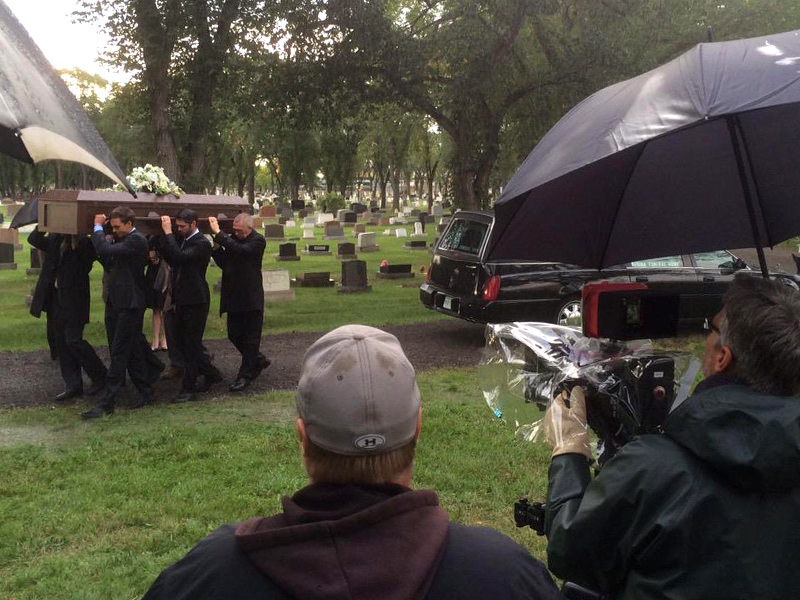 With the camera crew huddled under umbrellas, the cast members bring in the coffin. It's nice to finally get that thing out of our office. 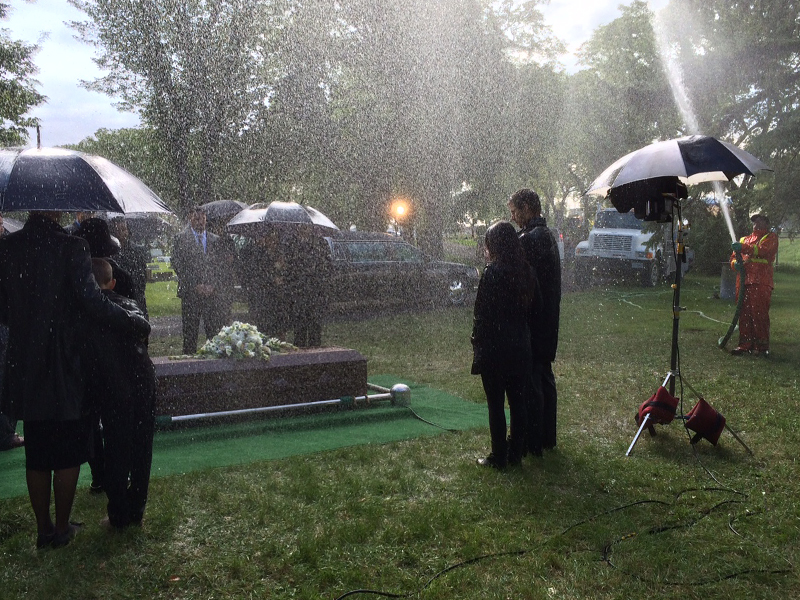 With the water pouring down on them every take, our cast didn't have to do much extra acting to appear cold and sad. 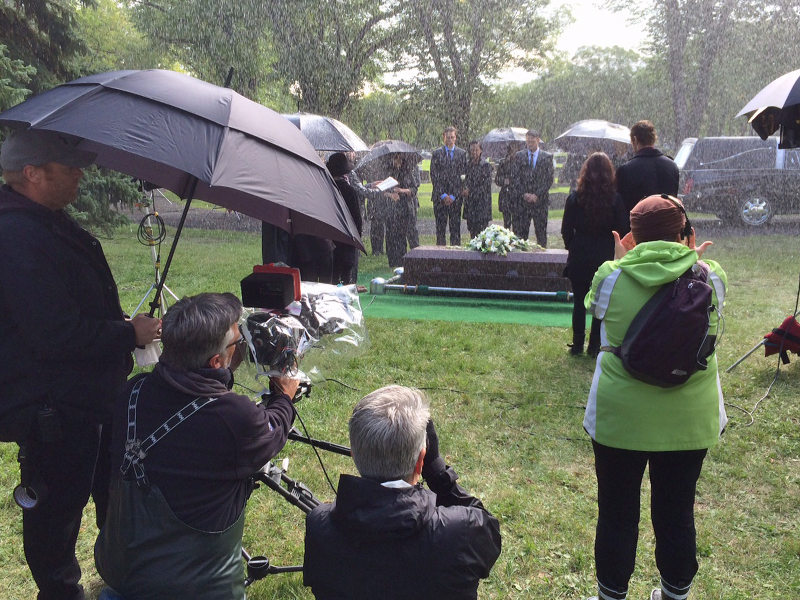 "Look miserable and grief-stricken," the crew told the actors, as the crew stayed warm and dry. 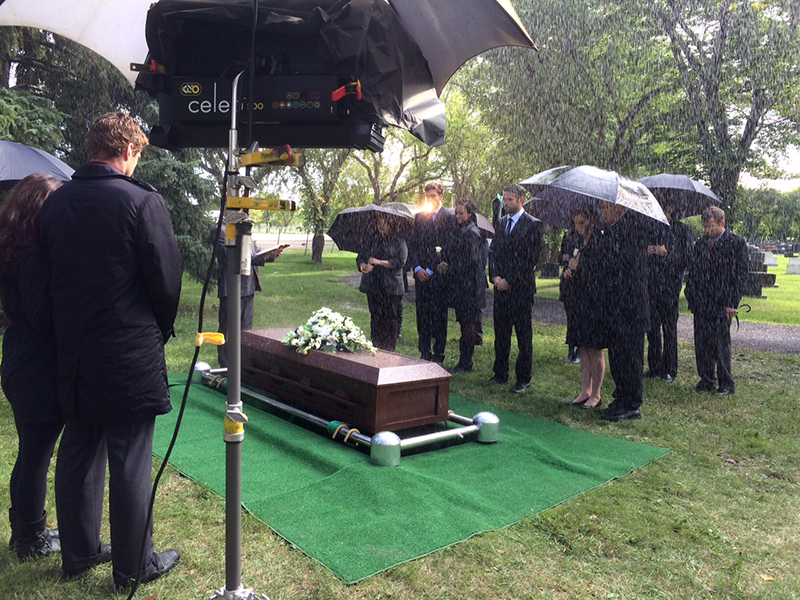 It was not easy on the actors to spend an entire morning standing under the pouring rain, get out of their wet clothes, have lunch, then get back into their wet clothes, and spend a few more hours getting soaked in a cemetery. However, the actors were all real troopers and we captured some great footage for the commercial. 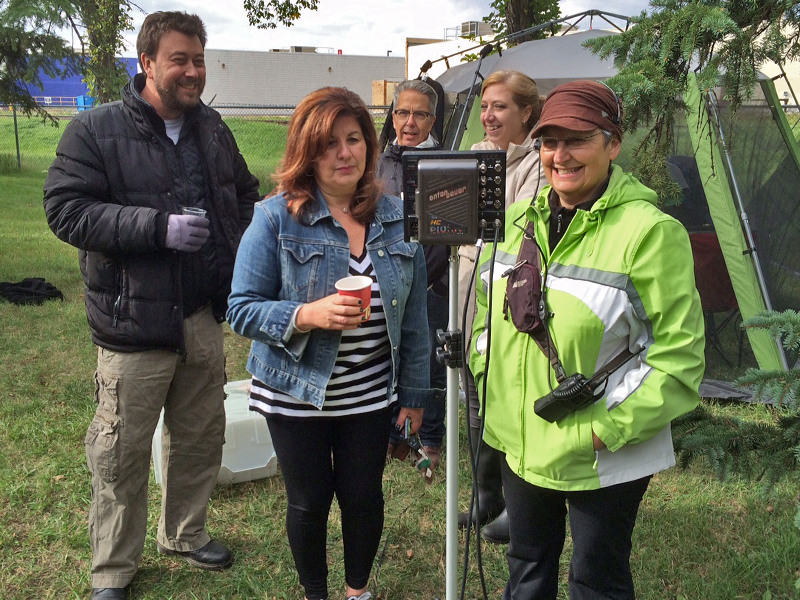 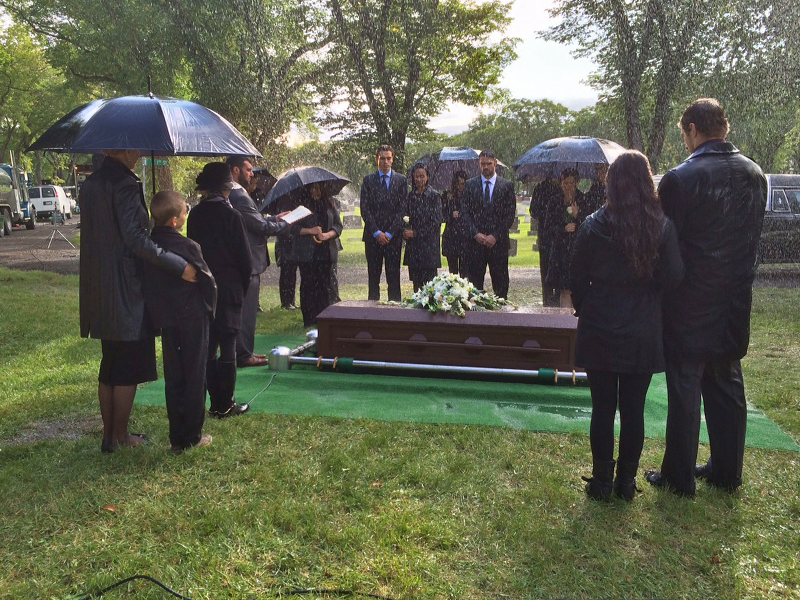 Okay, it's time we let this web post rest in peace. Remember: don't text and drive. As the song in the commercial goes: "Are you willing to die to get the last word?"