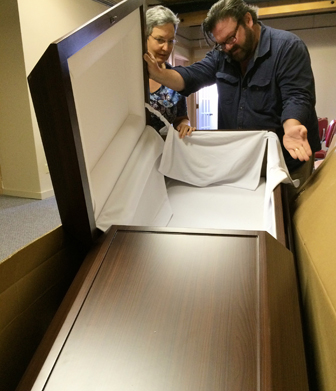 A career in TV and film production is an interesting one. Every project is different and no day is the same.

And then there are those days when you have to haul a coffin up to your office.

Before you start sending flowers and sympathy cards, everyone here is fine. No need to panic. The backstory here is that we needed a coffin to use as a prop for an upcoming commercial project that Java Post Production is doing with Groovetime Creative for SGI (Saskatchewan Government Insurance).

Directed by Lowell Dean (writer/director of the horror features 13 Eerie, WolfCop and the upcoming sequel WolfCop 2), this commercial project has, as you may have guessed, a rather grim and serious message, which requires grim and serious props. So, cue the coffin.

But first, let's see if we can get it from the delivery truck to the Java Post Production office. 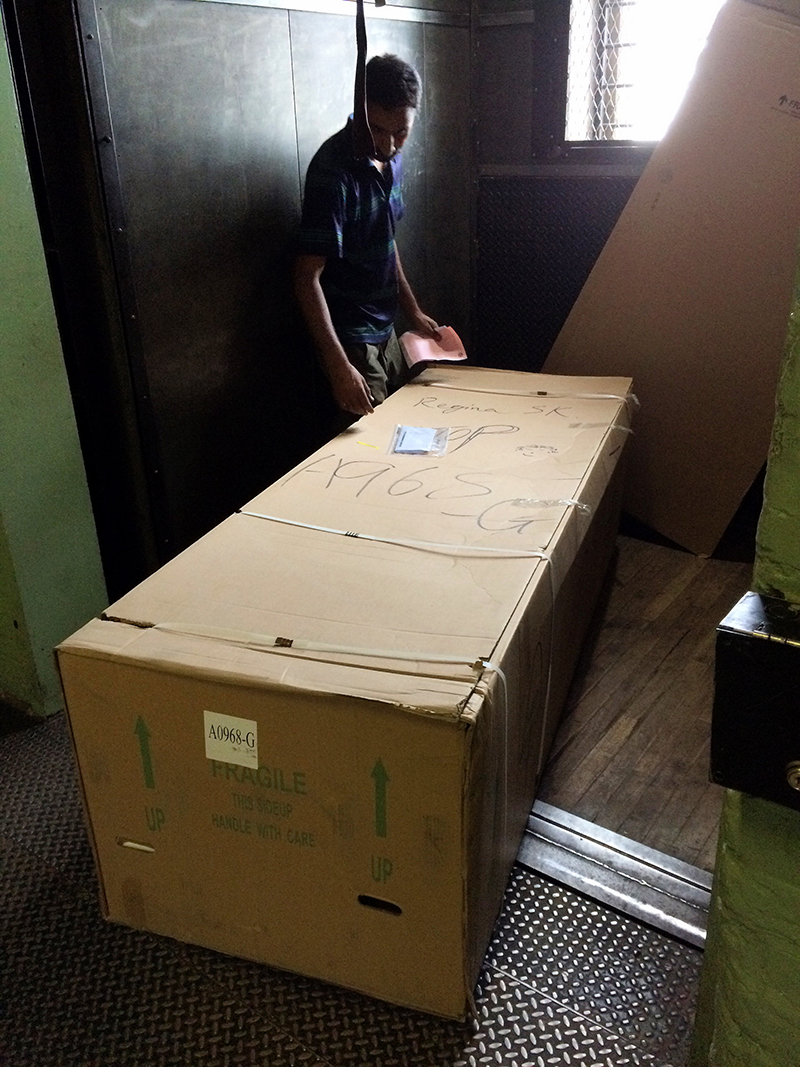 The deliveryman thought we had hit a snag when we discovered the box was too big to lay flat in the elevator. Luckily, the box was fairly light (because the coffin wasn't occupied...as far as we know,) and we were able to stand it upright for the ride up to the Java Post Production office on the 4th floor.

The deliveryman thought he was delivering a sofa to us and we didn't have the heart to tell him otherwise. Not because we are kind, sensitive souls, oh no. We were just afraid he'd drop the box and then we'd have to haul it up to the office ourselves. 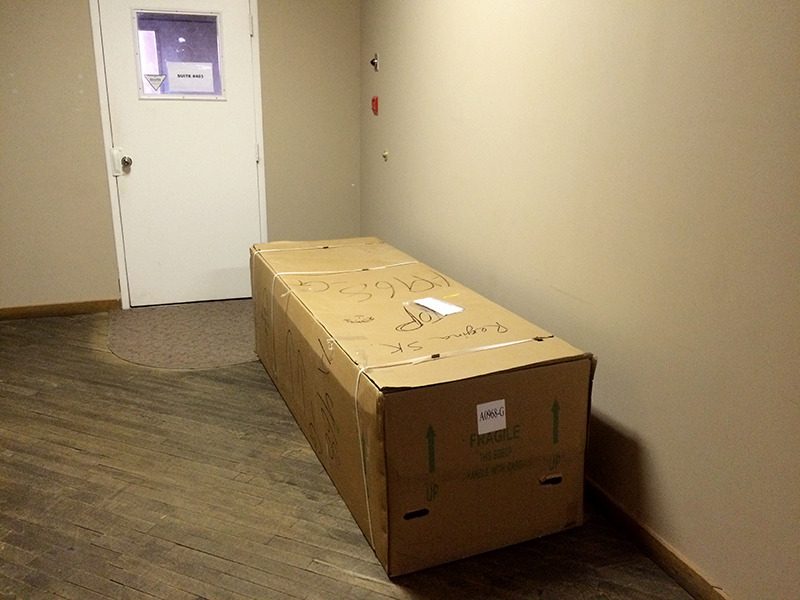 While waiting for the crew to come and move the box to it's final resting place (we know we should maintain a "grave" demeanour but these jokes just write themselves), we just put the coffin in a corner of the hallway. The condo neighbours will never be the wiser. We just hope they don't ask where that muffled banging noise originates. 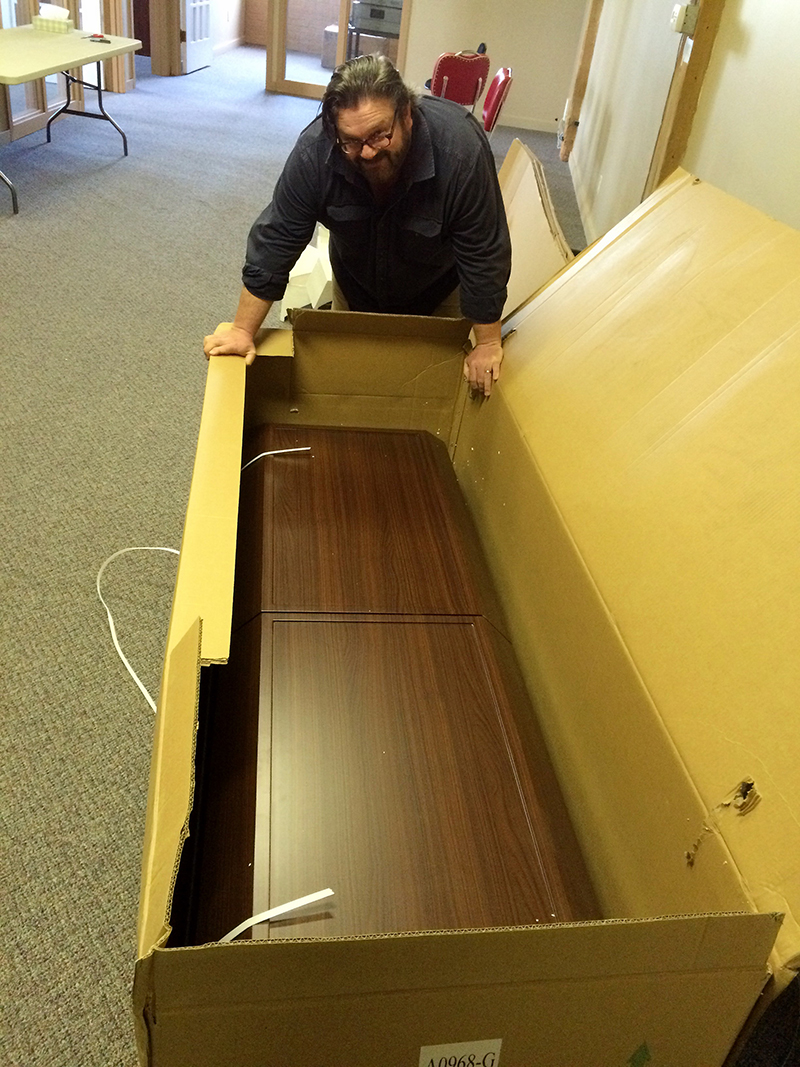 Production designer and props master, Jay Robertson, unwraps (unearths?) the woodgrained casket, one size fits most. At this point, we're all still relatively certain it's not occupied. We think.

Unwrapping things like this makes it like an early Christmas for Jay. Although I really think he was hoping for a pony.

Still, that could happen. After all, Jay hasn't opened the lid yet. 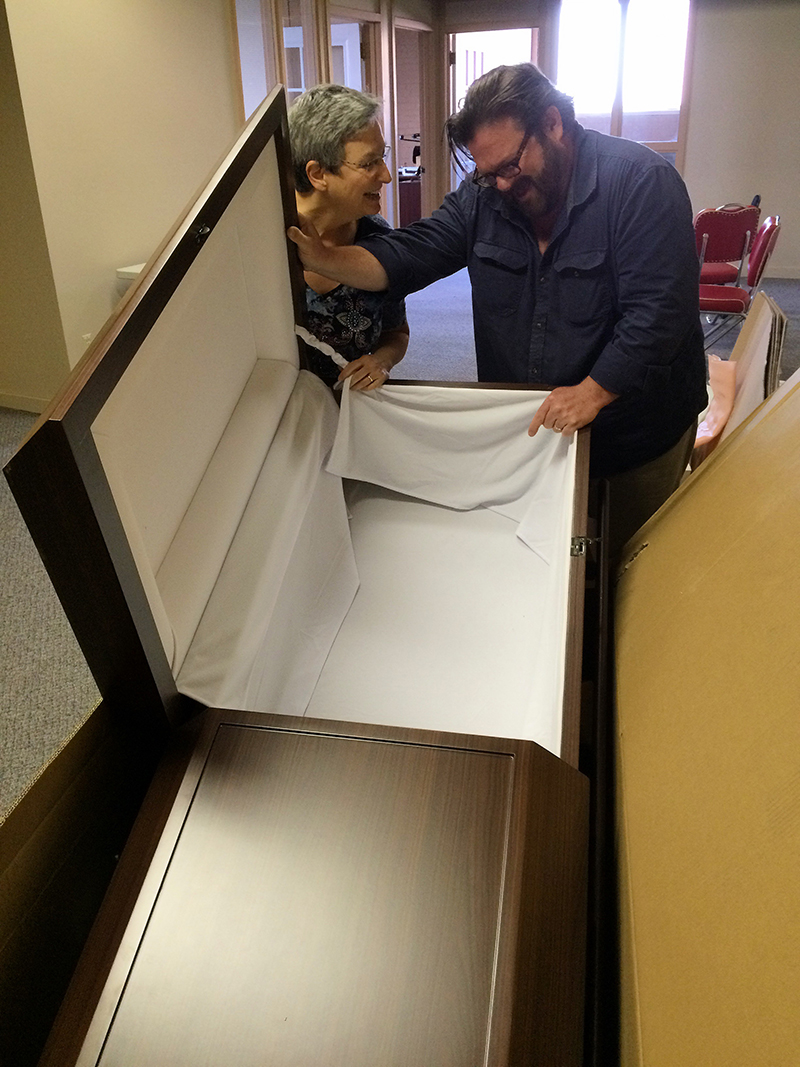 Judging from the smiles on their faces, it appears Jay and Java Post Production Vice President Joan Speirs are playing a rousing little game of "Hey, guess who we could stuff in here?!?" 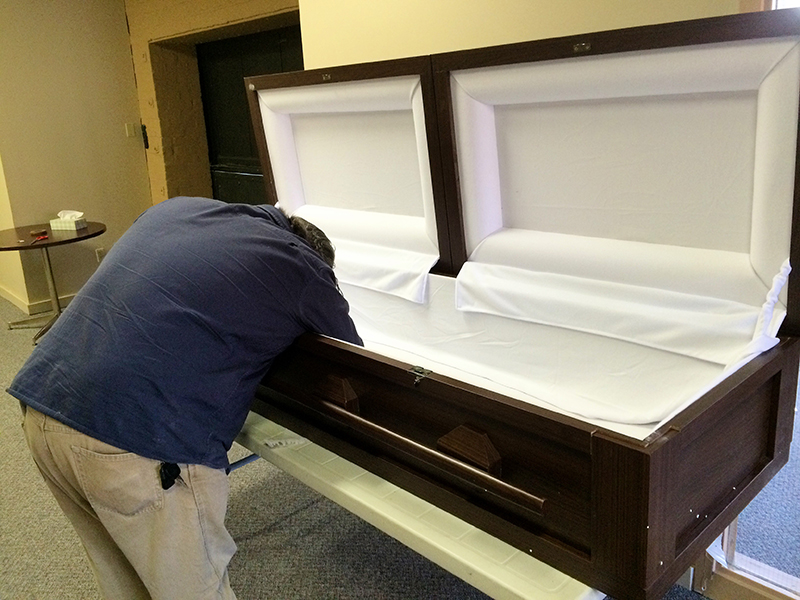 Looks like Jay has broken down and collapsed with grief. Or he's had a bad lunch and is throwing up into the casket. We can't take him anywhere. 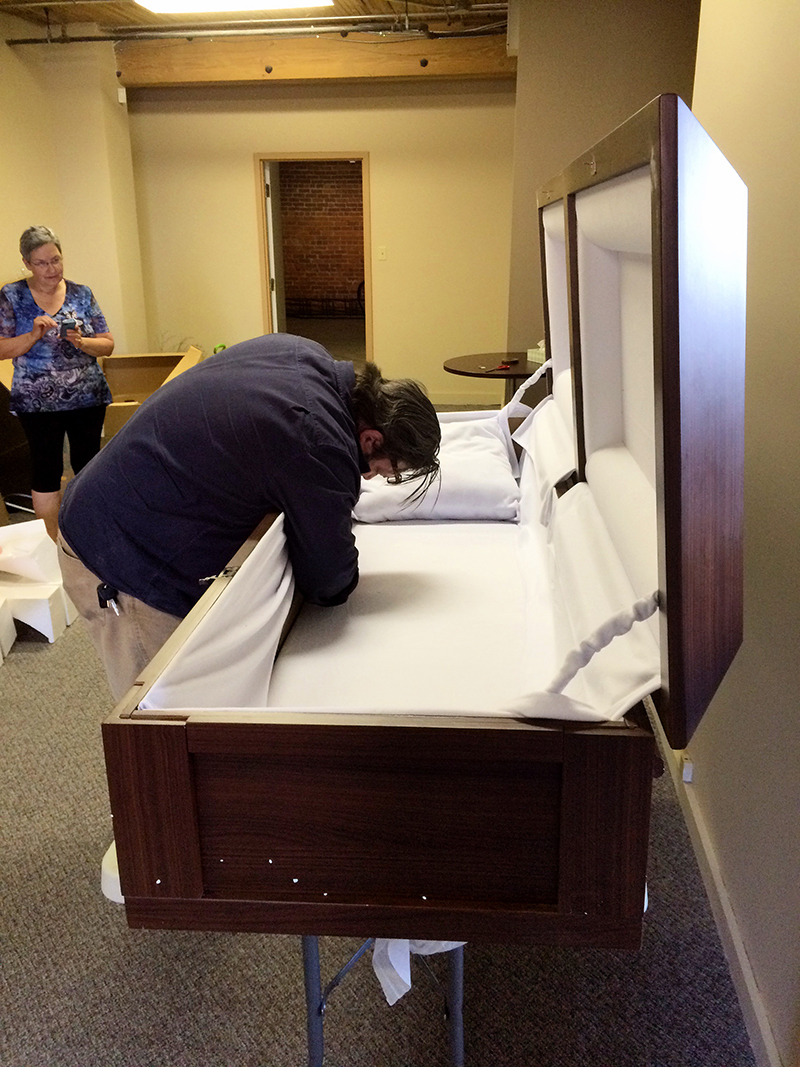 Oh, wait...it's okay. Jay's just checking out one of the inner hinges. Or perhaps he's trying to figure out why the lid locks from the inside. Weird. 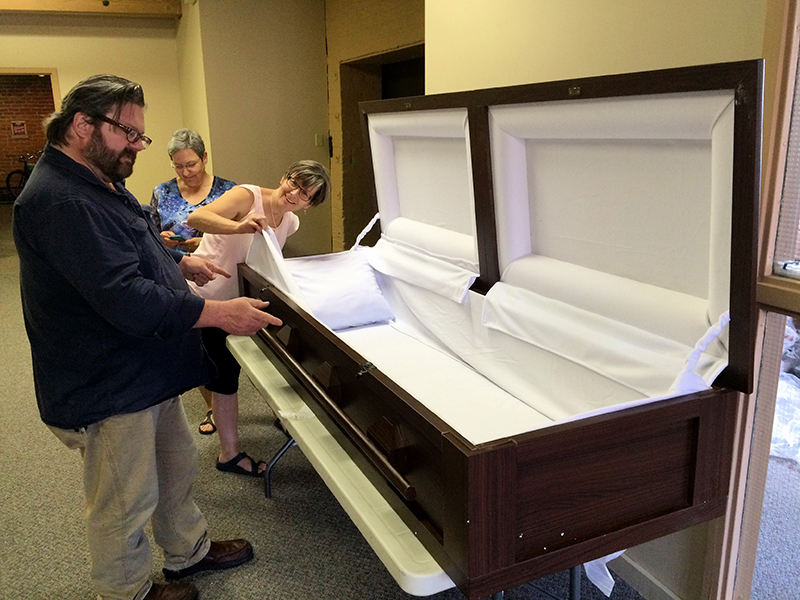 Our Coordinator, Maureen Bennett, had to come over and check out the quality of the lining. She was a little disappointed that the pillow wasn't memory-foam. Jay figured that adding a few bags of ice cubes and some cases of beer to this thing would really put the FUN in funeral. 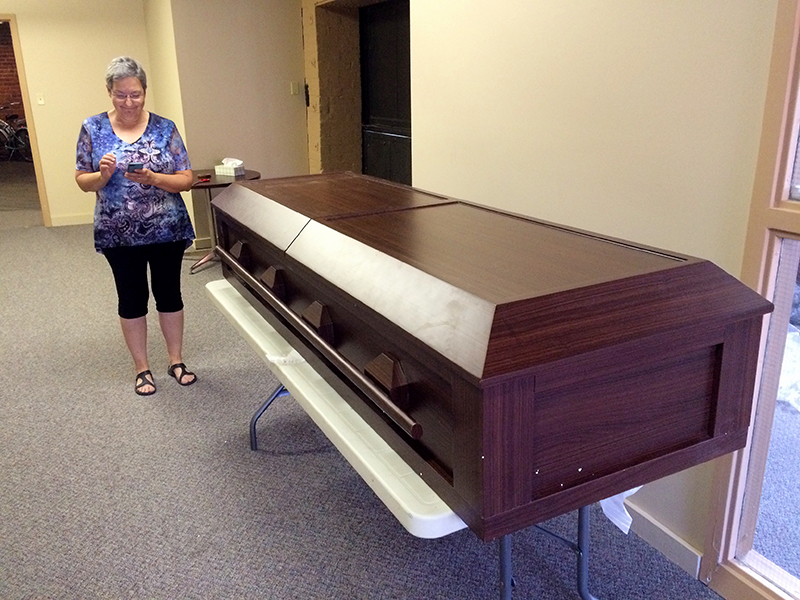 In the end (and isn't THAT an ominous phrase at this juncture), we decided that, once the shoot was done, this could make an excellent office-coffee-table-slash-storage-unit. Imagine the practical advantages: a large surface area for the TV remote and your TV dinner, plus excellent storage space for spare blankets, photo albums, etc.

So, the next time you're in the Java Post Production office and you put your feet up on the coffee table...just remember that it might not be a coffee table.