Up to our Hipperson in Concrete. 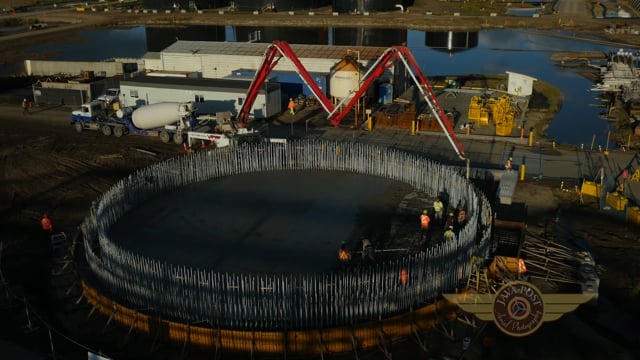 Our Java Post Production team was recently out at the Mosaic Potash plant near Belle Plaine, shooting on the ground and in the air to document a big concrete project by Hipperson Construction. For 11 hours non-stop, concrete was poured onto 60 tonnes of rebar to create a massive foundation, 25 meters in diameter. Sixty-two cement trucks were called in from Regina and Moose Jaw, as 480 cubic meters of concrete flowed from sunrise to sunset and well into the night.

Including finishing time, the entire job took 17 hours to complete. After three days, the forms are removed and the foundation will be completely dry in about a week, ready for the next phase of construction.

Of course, in all these impressive statistics, the one number in which Hipperson Construction takes the most pride is zero: zero safety incidents and zero injuries.

Above and below in the foreground we see our own "Java Jack" Tunnicliffe recording one of the many cement trucks that arrived at the job site that day.

The cement trucks dump their load into a big hopper thingy (please excuse our highly technical construction jargon, we're film guys, after all) which feeds a hose attached to the big red articulated arm.

Here Jack (on the right) takes a closer shot while standing in amongst the 60 tonnes of rebar.

To capture some time-lapse footage of the project, we needed to mount a GoPro camera somewhere - preferably somewhere high. Cue the giant SKYTRAK forklift camera mount. It made a great camera mount...and it was possibly the heaviest camera tripod we've ever used.

Above and below are still images taken from our Javacopter drone aerial footage. From these aerial perspectives, you can get a better idea of the size of the foundation being poured (25 meters in diameter) and get a better look at the articulated arm that fed the concrete onto the site. It was pretty impressive to witness the whole process, start to finish.