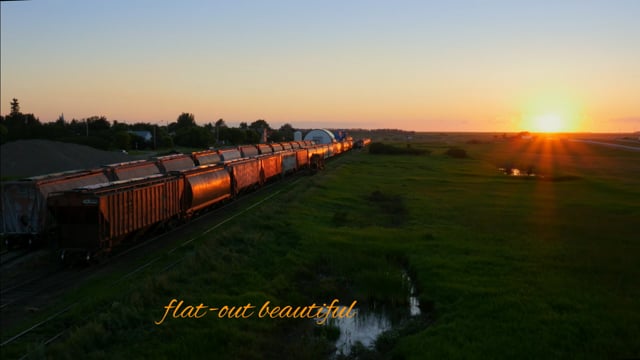 As part of the overall campaign, our aerial photography division - Java Post Aerial Photography - was tasked with shooting the aerial images needed to capture the breathtaking wide open spaces of our province.

In the 60-second "Grasslands" spot, seen above, a pair of hikers explore Saskatchewan's Grasslands National Park, one of the few remaining natural grasslands in North America. Home to bison and stunning scenery, Grasslands National Park is also a star-gazer's paradise. As Canada's darkest dark sky preserve, the stunning beauty of the stars shines brighter here than anywhere else.

Of course, sometimes even the stars in the sky need a little help to look their best on television. And that's where Java Post can help. :)

Here we see Trevor describing the intricate flight plan to the Phoenix Group's Dustin Panko. One imagines the detailed description was along the lines of: "We're going to fly up over there and see what we get."

Time for a quick "dronie" (a "selfie" taken with a drone) on the way up. You can see part of the UAV's landing gear in the right edge of the screen. This will soon be retracted to allow our 4K Ultra HD camera a full 360-degree view of the scenery.

The endless horizons of Grasslands National Park looks particularly spectacular from the air.

Co-director/co-photographer Derek Frankowski lines up a jib shot of the gorgeous view.

The two ground-based stars of our commercial (as opposed to all the sky-based stars) prepare to take a stroll in the deep prairie grass. It's not called Grasslands National Park for nothing.

Apparently, all this fresh prairie air can be relaxing. Here, sound recordist Tracy Westgard and camera assistant Todd Irving pause for a moment to enjoy the scenery.

And who can blame them, when you have Saskatchewan scenery like this?

Java Post Production is very excited to start work on NEXT YEAR'S Tourism Saskatchewan campaign! Slated for airing in 2016, the next campaign will begin shooting this summer.