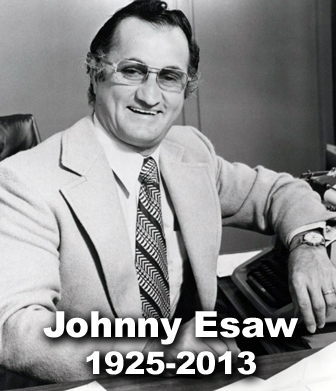 Recently, the sports broadcasting community of Canada mourned the passing of one of its legends: Johnny Esaw.

A member of Canada's Sports Hall of Fame and a 2004 inductee into the Order of Canada, the North Battleford, Saskatchewan-born Esaw cast a long shadow over sports broadcasting in Canada for decades.

Jack Tunnicliffe, owner of Java Post Production, has his own special memory of working with Johnny:

"In the late 70's I was a producer for CKCK-TV, the CTV affiliate in Regina, Saskatchewan. I was the producer of the local football show and the Saskatchewan Roughriders were in trouble. My boss at the time, Bruce Cowie, was very involved with the Riders and came to tell me that we'd be doing a save-the-Riders telethon and that I'd be producing it. It was a huge undertaking and we brought in sports talent from all across the country. I contacted everyone and it was immediately apparent how the egos worked with these people. Everyone wanted to be the star of the show.

When the weekend of the telethon arrived, I had a meeting of all on-air talent in a large meeting room at the Assiniboia Club. I had been told by others about Johnny's ability to just run on or run away with things, so my intention was to let them know that they would be cut off if they did not listen to my direction. Here's me, some 23-year-old, wet-behind-the-ears kid, telling the head of network sports I'd cut him off. Haha! Well anyway it worked and the telethon was a huge success and put money back into the Rider's bank account.
I was on headset all night as the director of the show, as well as being the producer who sort of created the show. We wore many caps in those days. It was exciting but exhausting. After the show we had a wind-up party at the Regina Inn and Johnny approached me and said, "I want you to come work for CTV Sports in Toronto". It was totally unexpected and, while it was exciting news, it also scared the shit out of me.
The next morning I went to work and I told Bruce Cowie about the offer. He exploded...I'd never seen him like this before. He picked up the phone right that second and placed a call to Johnny Esaw and had him on the other end in less than a minute. He began by yelling at him, telling him to never try and highjack his employees, etc. Eventually the two settled down and what came out of the discussion was a compromise for both sides. Johnny would get to use me on weekends and Olympics and during the week I'd work for CKCK-TV.
It was an exciting time for me. I was immediately dropped into CTV football, first working as a production assistant in the mobile but, before I knew it, I was was producing and directing games. I remember they sent me out a CTV jacket, pants and tie. I think I still have them somewhere, but I forgot to take socks with me, so I did my first game in bare feet inside my polished black shoes.
In 1980 I went to the Olympic Games in Lake Placid and, at 25 years of age, was the youngest producer/director at the games. I was scared out of my mind, but Johnny felt I was ready. During my first day of work they threw me in the control room to direct with a group of people I'd never met in my life. In the studio on headset to me was CTV national news anchor, Lloyd Robertson. I thought I was going to puke, I was so nervous...but I got through it. We were going into speed skating and it started to snow so they pulled out the Zamboni. I had no idea what to do so I leaned into the mike and said, "Lloyd, fill." Fortunately, Lloyd was an old pro and had all sorts of back-up material to fill with. We didn't have anything on tape to fill with as we were just getting going on the Olympics. It's all different today with promos and profiles that are pre-packaged and ready to go.
Well, Johnny went out into the hallway at the broadcast facility and found the Premier of Alberta, Ralph Klein, and brought him into the studio. Of course the next Olympic Games were coming to Calgary and this was big news for Canadians. While I sat on a close-up of Lloyd Robertson, the studio crew sneaked Ralph onto the set and into a seat next to Lloyd. When Premier Klein was miked up, we zoomed back for an interview like it was planned all along. Wow! What an introduction to Olympic broadcasting this was for me.
Johnny and I kept in touch over the years but I didn't really hear from him much after Calgary. He was a good guy and certainly helped me in my career. I have fond memories of Johnny and will miss him."