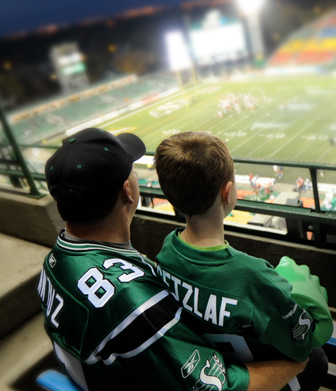 Oh, what we wouldn't do for the Saskatchewan Roughriders!

The Saskatchewan Roughriders Football Club recently unveiled its 2013 advertising campaign theme: "This is where memories are made!" And Java Post Production has some excellent memories of helping to create the 90-second web and 60-second broadcast spots.

The video features the song "Oh What I Wouldn't Do" by Canadian singer/songwriter Serena Ryder. And yes, it's a total coincidence that a performer with the last name of Ryder is involved in a marketing campaign for the Riders. (Mind you, if her name had been Serena Stampeder or Serena Bomber, who knows? This campaign might have been quite a bit different.)

The campaign focuses on the enthusiastic fans in Mosaic Stadium - literally, the place where memories are made.

Over the course of this past winter, the images were culled down...and culled down again...and then yet again...to select a group of shots that would best represent the passion and dedication of Rider fans. Those images were then edited to the music and lyrics of Serena Ryder.

The visual treatment was kept very straightforward. The shots were all colour corrected with a subtle "2.5-D" effect used in just a couple of shots. It's something that a viewer might miss when they first see the video, but becomes a nice little surprise when they spot it during subsequent viewings.

We're very pleased with the way it all came together. Hit "play" on the attached video and see for yourself.