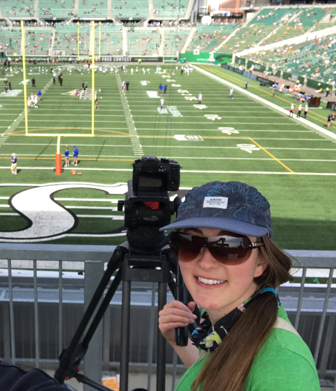 Java Post Production was down at Mosaic Stadium in Regina, Saskatchewan for the 53rd Annual Labour Day Classic between the Saskatchewan Roughriders and the Winnipeg Blue Bombers. The game-day sponsor (and stadium name-sake), The Mosaic Company, had something very special planned for the pregame festivities: two giant "card stunts."

Involving more than 30,000 cards for each of the two card stunts, this would be the largest display of its kind EVER in Canada. It broke the previous record set in 2015 by - you guessed it - the crowd at old, "historic" Mosaic Stadium, which was decommissioned in 2016.

On behalf of the Saskatchewan Roughriders and The Mosiac Company, Java Post Production was brought in to capture panoramic still photographs of the two card stunts. Since we were there anyway, we also shot some video. 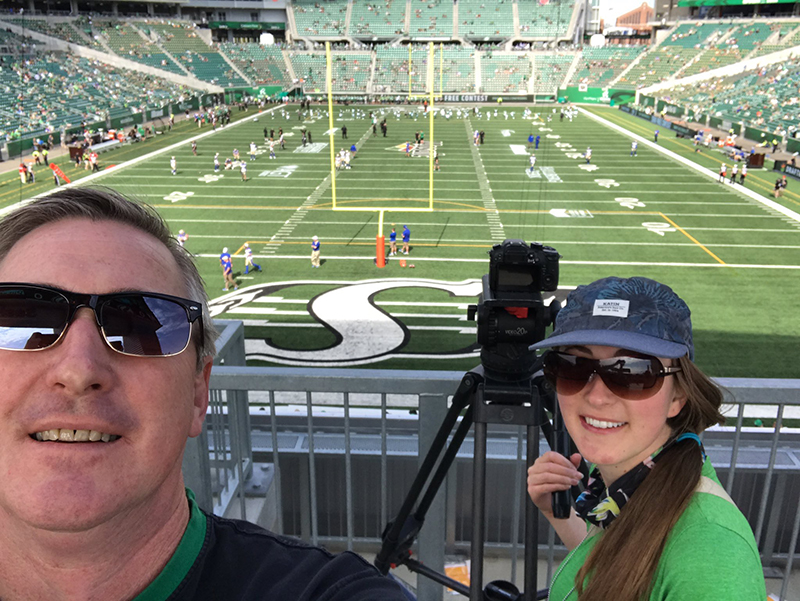 Trevor Bennett (left) and Kristine Dowler from Java Post Production take a selfie from the south end concourse of Mosaic Stadium, as they prepare to photograph the two pregame card stunts.

Here is the completed panoramic photo of the second of the two record-setting card stunts. In this stunt, the cards held by the crowd mimic the multi-coloured seating that was such a signature of the previous, "historic" Mosaic Stadium, which the team had occupied for many decades, before moving to this new facility at the start of 2017.

Although it's a little hard to read from this angle, the signs on the left side of the stadium say "New House" while the cards on the right hand side of the stadium spell "Same Home." Signs in the far end zone mimic a watermelon, complete with seeds. Watermelons play a big part in the fun experience of being a Saskatchewan Roughrider fan.

And here is a panoramic shot of the first of the two card stunts. As you can probably guess, this card stunt took place during the singing of the Canadian National Anthem. Once again, these Mosaic Stadium card stunts were the largest stadium card stunts ever performed in Canada: more than 30,000 cards! It was very impressive for our Java Post Production crew to see it take place and photograph it for posterity.