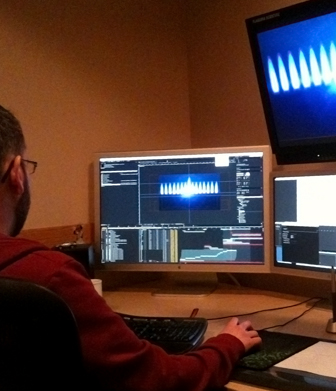 Keeping the flame burning for SaskEnergy.

During this spell of frightfully frigid weather in Regina, there's at least one person at Java Post Production who is curling up for warmth near an open flame.

Our animator, Kevin Drysdale, has been working away on a soon-to-be-released animated web commercial for SaskEnergy, produced through MGM Communications. Here you can see Kevin working on an animated natural gas "flame" that will play a prominent role in the commercial. The reason the flame is blue and not the typical fire orange-red is because the flame represents natural gas, which burns blue.

Keep that SaskEnergy flame up on the screens, Kevin, because the rest of the Java Post staff is coming to your office to warm our hands over your monitors.