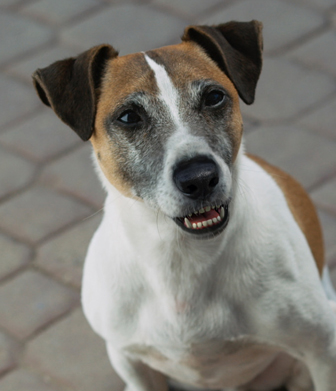 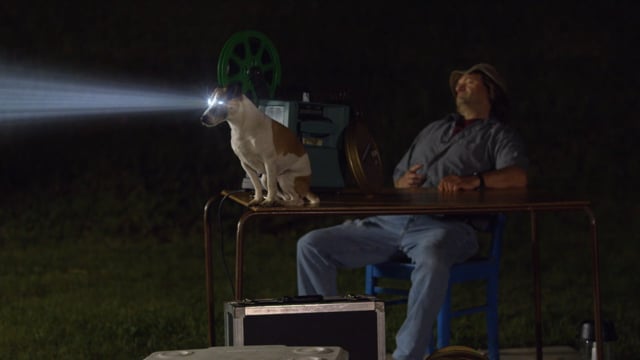 There's an old joke that goes something like this:

A guy sees a sign: Talking Dog For Sale. He rings the bell and the owner appears and tells him the dog is in the backyard.

"You talk?" he asks the dog. "Yep," the dog replies. After the guy recovers from the shock, he says "So, what's your story?"

The dog looks up and says, "Well, I discovered that I could talk when I was pretty young. I wanted to help the government, so I told the CIA and I became one of their most valuable spies. After years in counter-intelligence, I got a job at the airport doing undercover security. Then I got married, had a mess of puppies, and retired."

The guy is amazed. He goes back in and asks the owner what he wants for the dog. "Ten dollars," the guy says.

"Ten dollars? This dog is amazing! Why are you selling him so cheap?"

"Because the dog's a liar. He never did any of that stuff."

Well, here's something that's no lie. The visual effects artists at Java Post Production are helping to teach a dog to talk, one electronic pixel at a time, for the movie A.R.C.H.I.E. - featuring the voice of Michael J. Fox, written and directed by Robin Dunne, and co-produced by Trilight Entertainment and Java Post Production.

Here are a few behind-the-scenes photos of our visual effects (or "viz fx") artists at work: 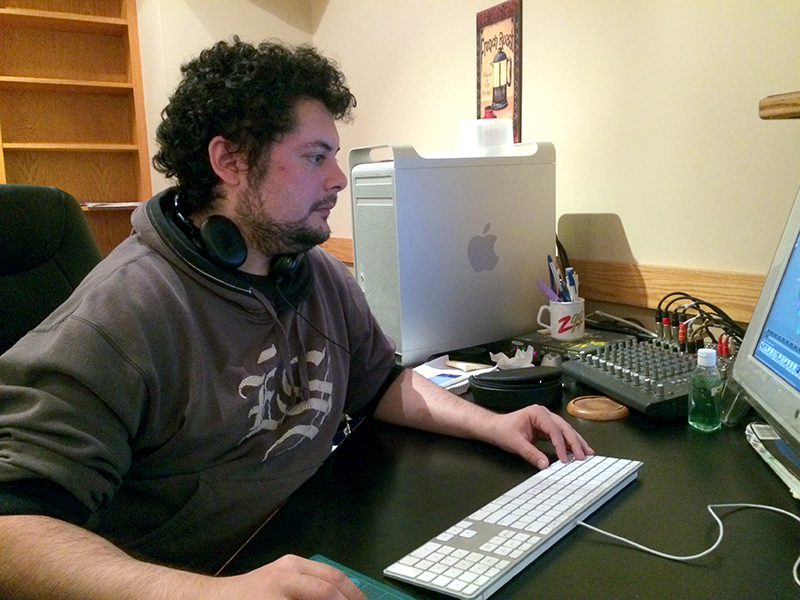 Tomás Ibar of Java Post Production, hard at work on the 3D digital animation for A.R.C.H.I.E.  Teaching a dog to speak in the digital world takes more kilobytes than kibble. Unfortunately, there's no "make the animated character talk" button you can just press to make this work happen all by itself. Whether the hand holds a paintbrush or a computer mouse, the work still has to be done by artists. 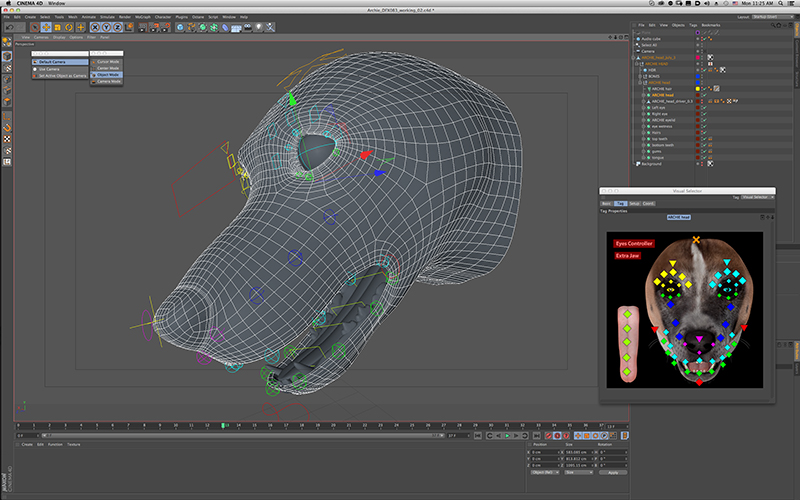 Points on the 3D model allow a wide range of movement to be controlled by the Java Post animators. This is essential for our artists as they manipulate various points in a wide range of combinations, syllable by syllable and shot by shot, creating facial movements for the voice of A.R.C.H.I.E: Michael J. Fox. 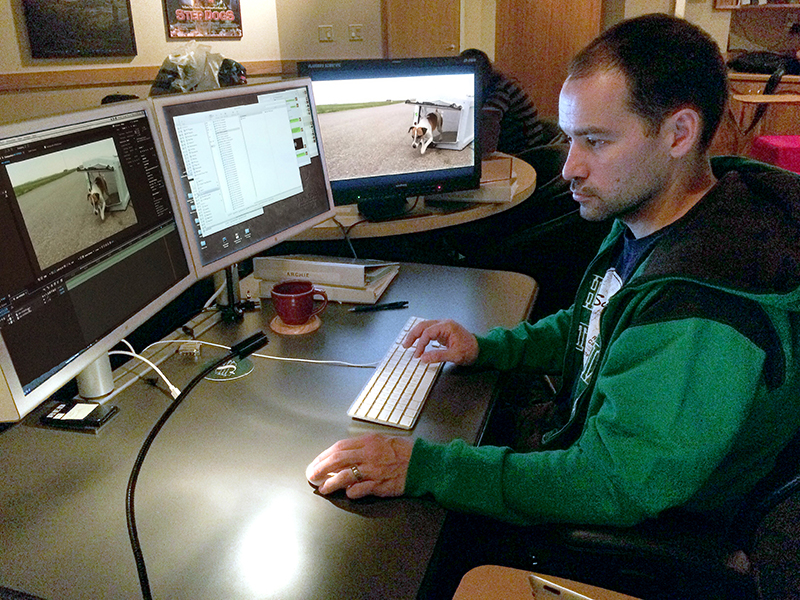 In another edit suite at a Java Post Production, editor Randy Shumay painstakingly paints out some fishing line frame by frame (and, at 24 frames per second of screen time, that's a lot of painting). The fishing line was used to move an object in a scene but, once Randy erases the fishing line from the shot, it will look as if the object had moved on its own.

In still another of Java Post's animation suites, animator Kevin Drysdale works on a different section of A.R.C.H.I.E. animation. On Kevin's computer screen you can see a reference image of him reading the talking dog's dialogue. This is the modern, computer screen equivalent to the old animation technique of making faces in a mirror, as the early cartoon animators used to do.

Kevin will refer back to that "looking in the mirror" shot as, frame by frame, he translates the mouth movements of a talking human to the mouth movements of a talking dog. Obviously, given the difference between a human's face and a dog's face, there's not a direct one-to-one movement correlation. But that's what makes animation an art form that takes a lot of skill and a lot of patience. 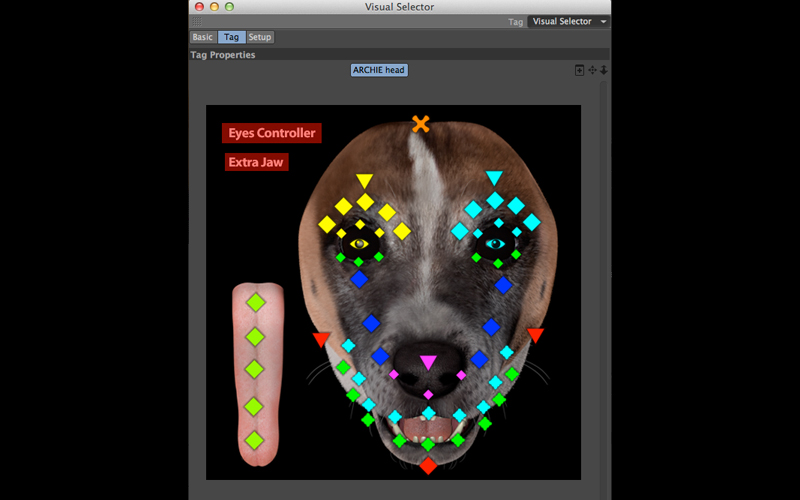 Movement control points, each representing key muscle groups, are mapped out on the animated canine face. There are even 5 control points assigned to the tongue. The skill and artistry of the Java Post animators is knowing what to move - and when - to bring life and language to our four-legged movie star. 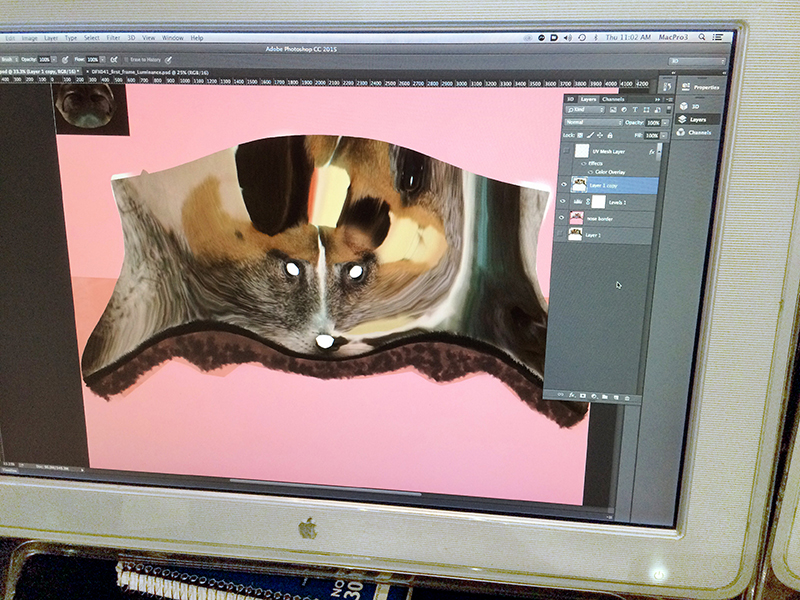 Well this doesn't look creepy at all. It's the digital "skin and fur" texture of the animated canine face, before it's been wrapped around the animated "skull." 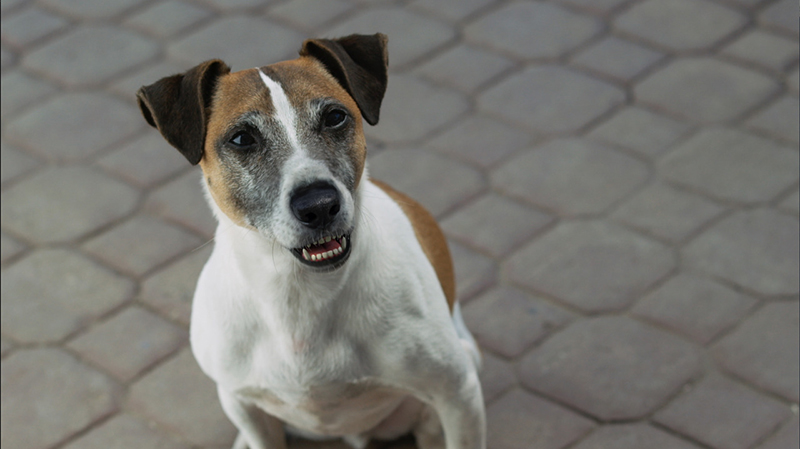