The concept was to have a young person making a "snow angel" which would then reveal itself to be the butterfly-shaped logo of Innovation Credit Union. To accomplish this, Innovation Credit Union's VP of Marketing, Mike Woroniak, put forth the idea of having our young actor fall back into a ready-made "butterfly snow angel," wave her arms a bit, and then we could run that footage backwards, making it appear that she had created the finished logo.

Sounds simple enough, right? Well, there was a little more behind-the-scenes work that had to be done before we could get the final shot. 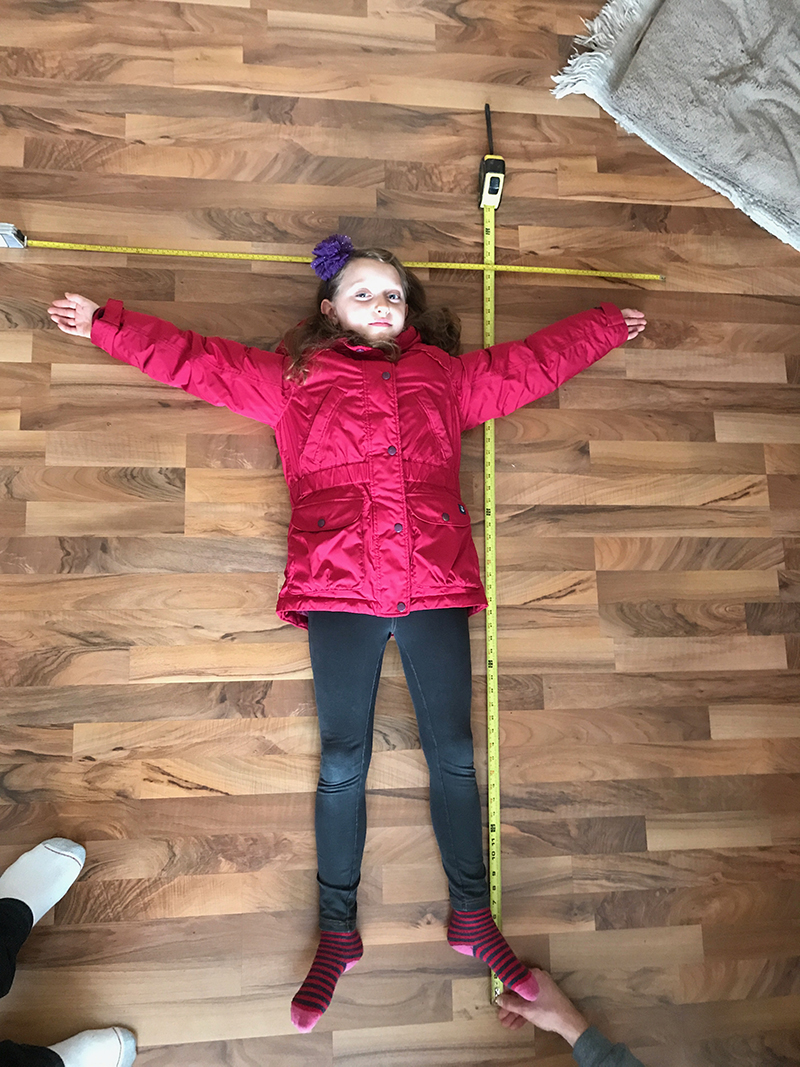 The process started with measuring the height and wingspan (for lack of a better word) of our young actor, Suki. Her wingspan was 132 centimeters (52 inches). 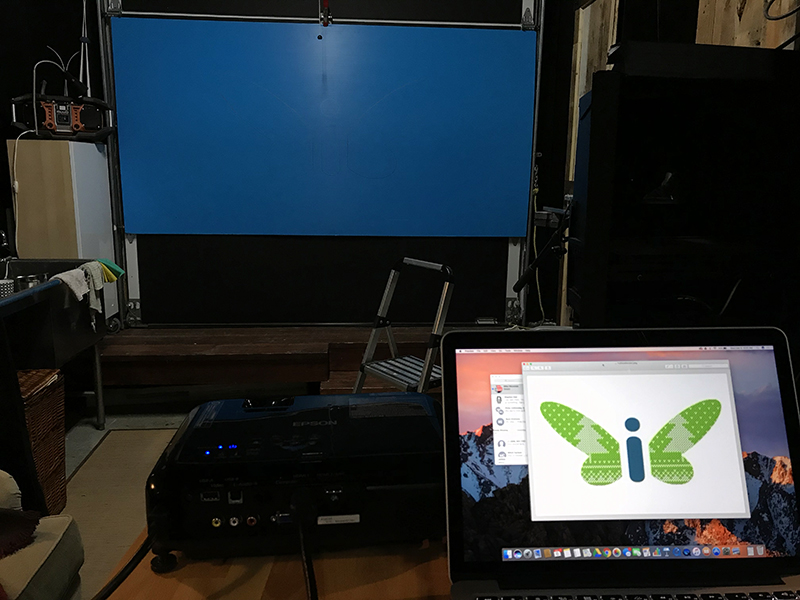 Using that measurement, a reference image of the Innovation Credit Union logo was projected onto a large sheet of corrugated plastic. 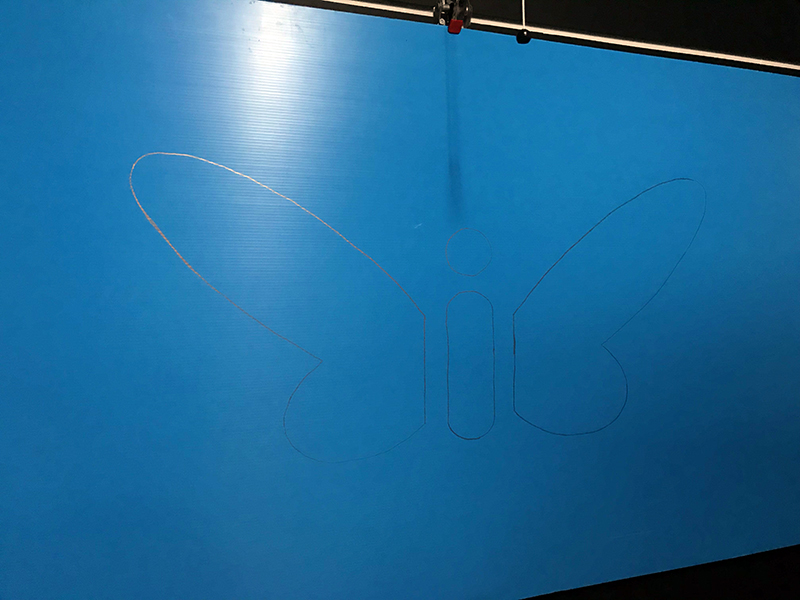 That image was then traced onto the plastic... 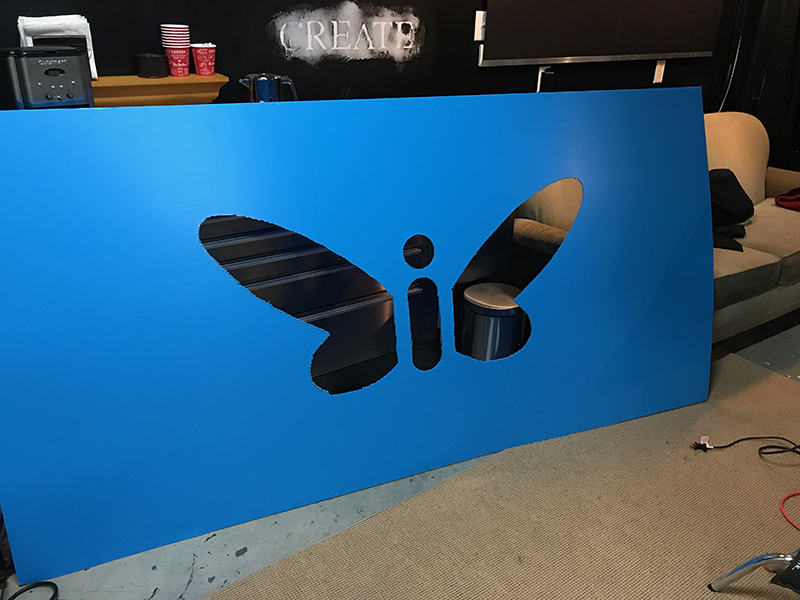 ...and then cut out to create a template. This would act like a stencil in the snow. 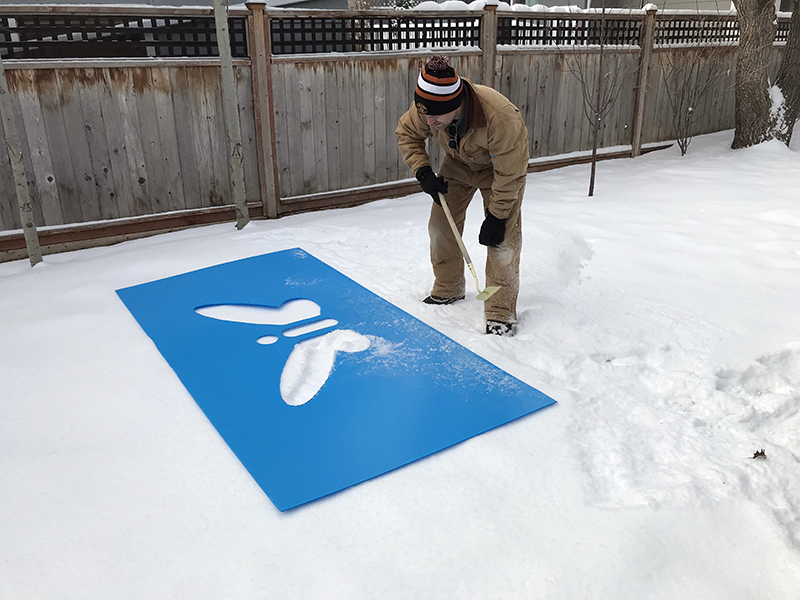 The next step was to test the template and figure out the best technique create the impression in fresh, powdery snow...which is not the most easy material to consistently and reliably manipulate, as you might imagine. And, in order to get multiple takes of this shot, we were going to have to create several of these "butterfly snow angels." 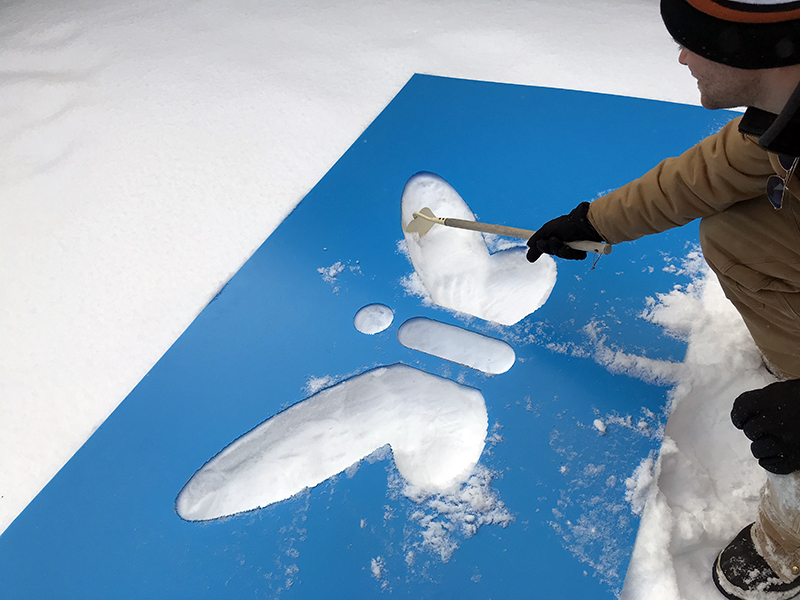 Our Art Director, Dan Crozier, perfected the process of creating the Innovation butterfly impressions by being, well, innovative. Aside from scooping out snow with a long rake, he used a blanket to smooth out big ripples and a feather duster (of all things) for the fine details.

With testing complete, it was off to our shooting location at the Sloan farm, not far from Regina. 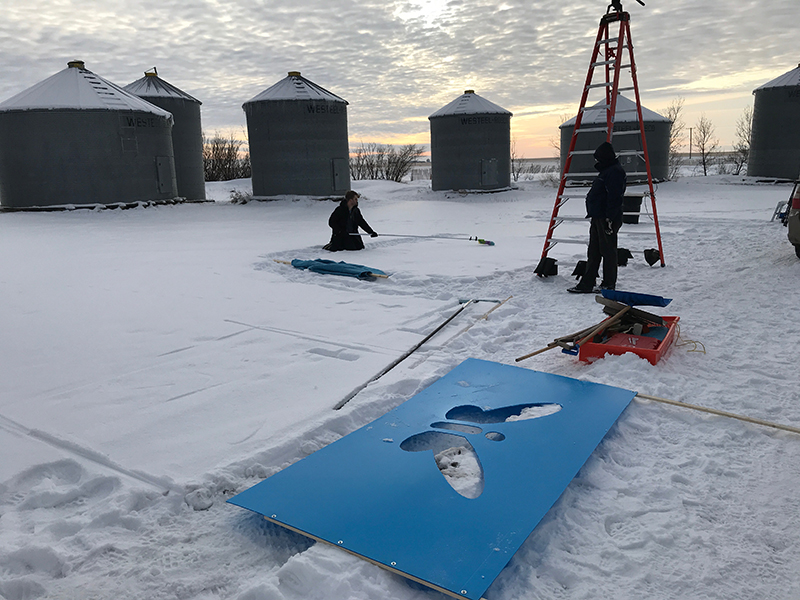 The reason for using the farm location was because we needed a large yard of snow at a consistent depth. The snow couldn't be too shallow, neither could it be too deep. The large yard area was required to allow space to create multiple butterfly impressions, while keeping the nearby snow untouched, but still allowing room for our gear and crew to set up and move around, without messing up the patches of nice, smooth snow we needed to show on camera. 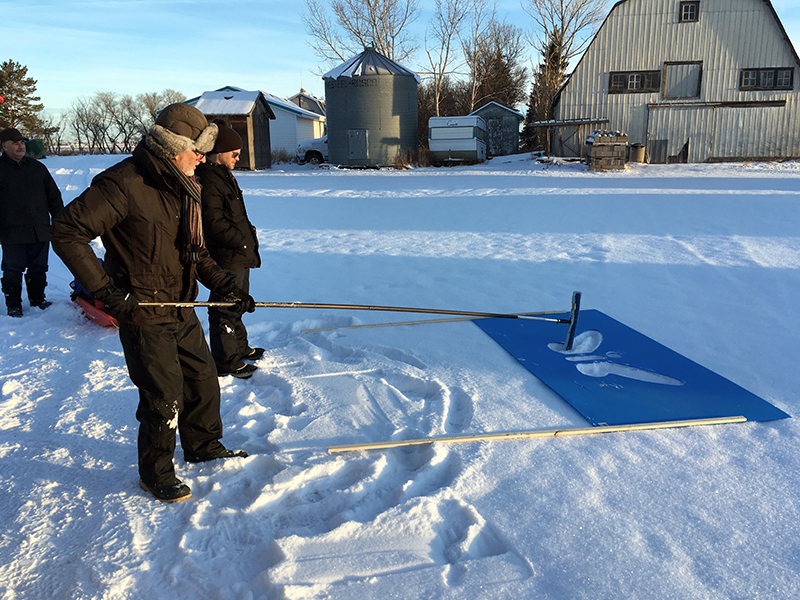 Above you see our director, Stephen Hall, starting to remove snow from the butterfly stencil with a long snow rake. The two wooden stakes on either side of the stencil allowed us to move the stencil into position snow, without creating footprints that would be seen by the camera. Yes, we could have walked in the snow and then just erased the footprints during the post-production process, but it's simpler (and far cheaper on the production budget) to just use two wooden sticks. 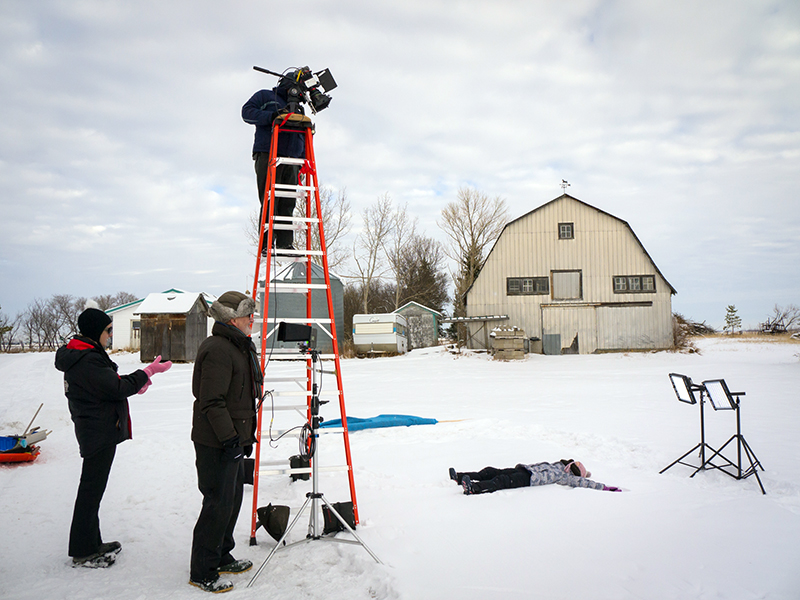 With our camera mounted at the top of a tall ladder, and our actor in position laying down on top of the "snow butterfly," we try a rehearsal. Planning and preparation will take you a long way, but you have to see how things look through the camera lens to dial in the final adjustments. 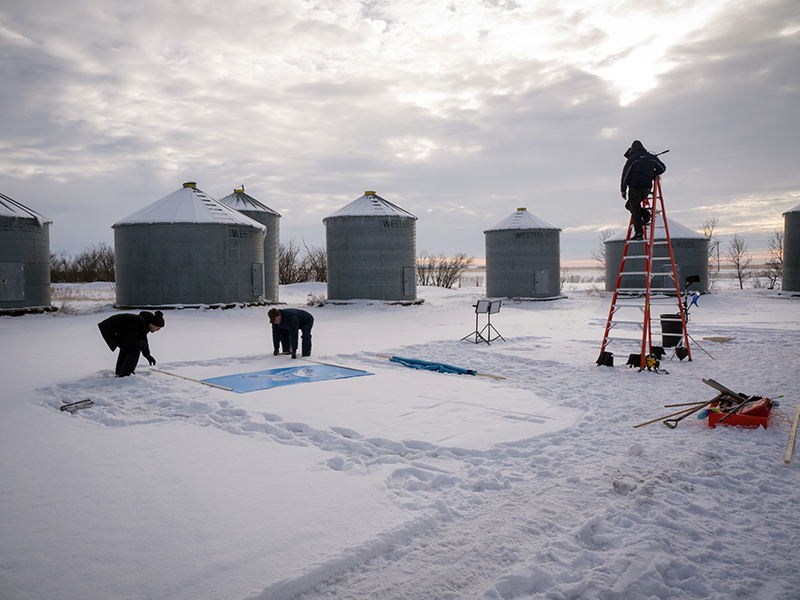 Time for a second take, so it's time to create a new butterfly impression on a clean patch of snow. 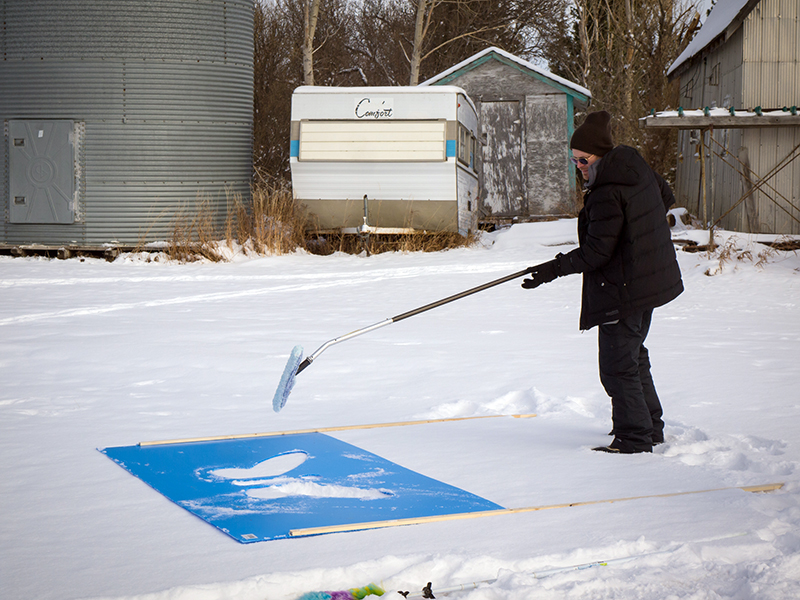 Our crew was hoping Innovation Credit Union might do a beach-themed version, so our crew could wear shorts and sandals while creating sand impressions on a tropical beach somewhere. But let's get this winter version done first. The tropical beach version can be our next pitch to the clients. 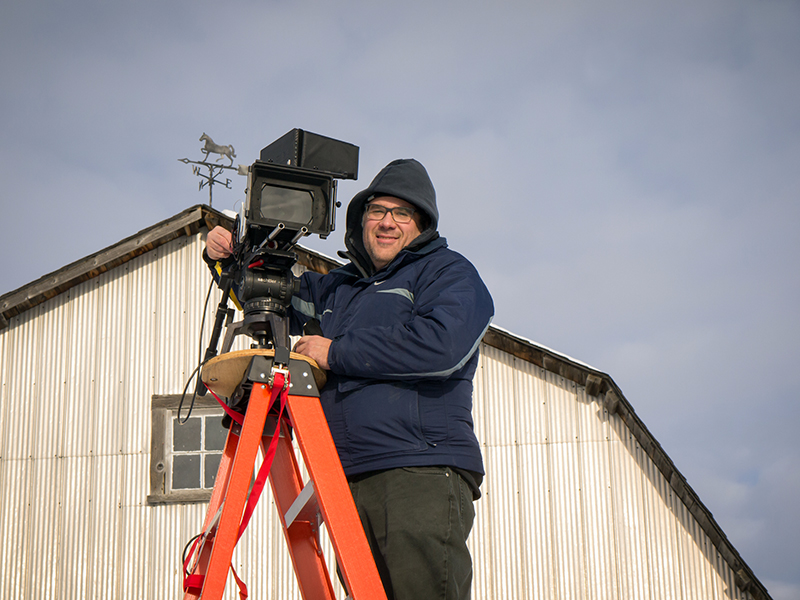 Perched high atop a ladder, meet our DOP (Director of Photography) and camera operator, Jason Delesoy. If you think that standing on a tall ladder all day in the cold is the most uncomfortable thing Java Post has ever asked Jason to do to get the shot we need, you'd be greatly mistaken. Thankfully, Jason is a pro and takes it all in stride. 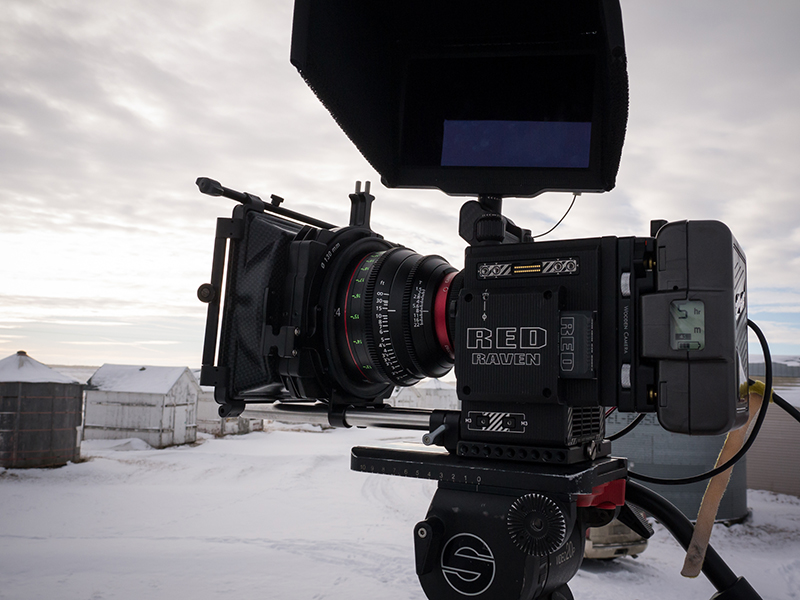 For the tech fans out there, Java Post's RED RAVEN 4.5K camera was used to shoot this project. 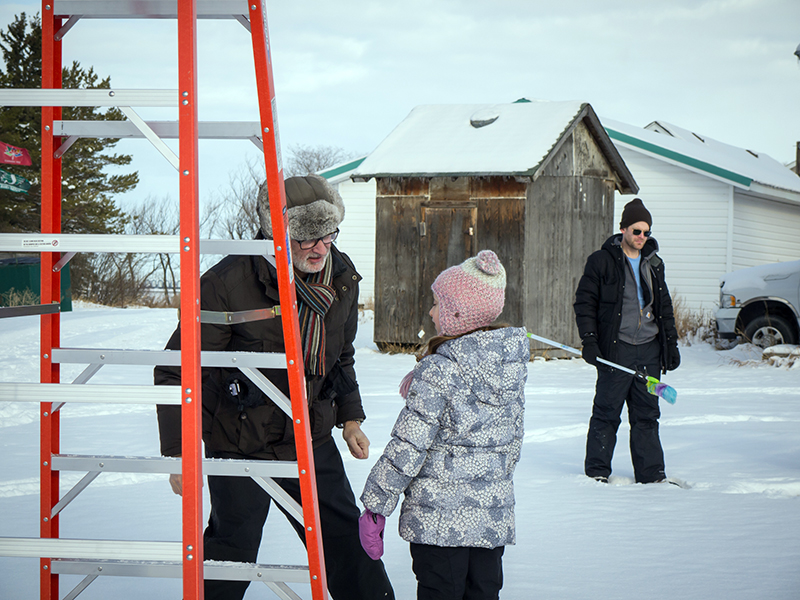 Director Stephen coaches our actor, Suki, before the next take. 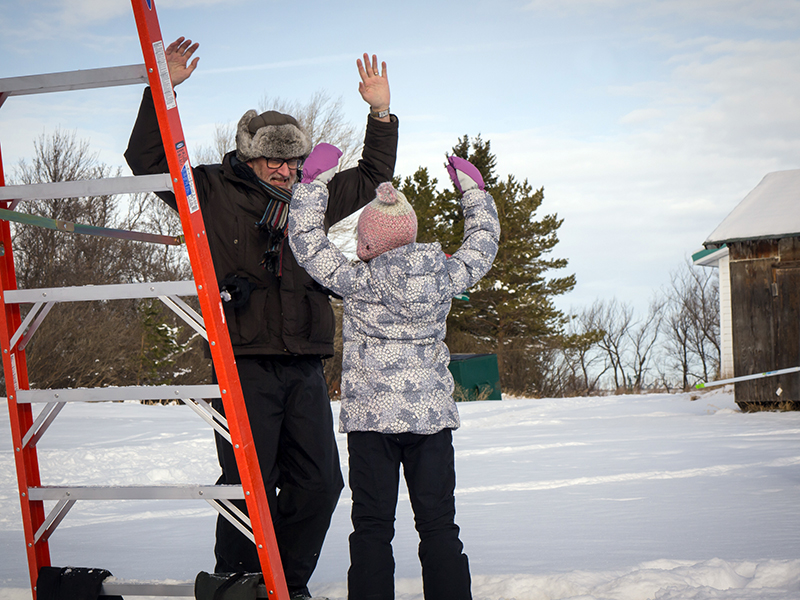 Although it looks like Stephen and Suki are surrendering, they're probably just practicing the snow angel movements. 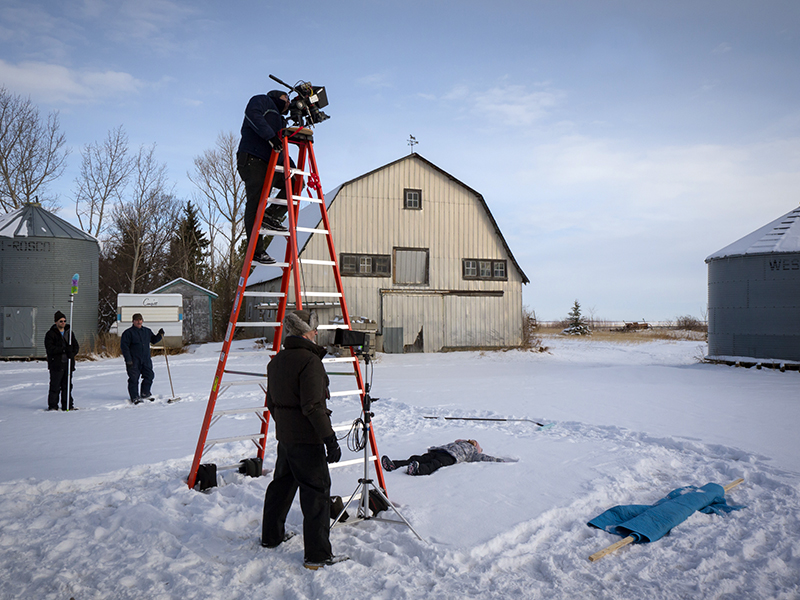 Beneath the never-blinking eye of the camera lens, Suki lays down on the snow and makes her "snow butterfly." Remember, in the final video the footage will run backwards, making it appear that she makes the snow butterfly and then gets up, instead of laying down in a pre-made snow impression. 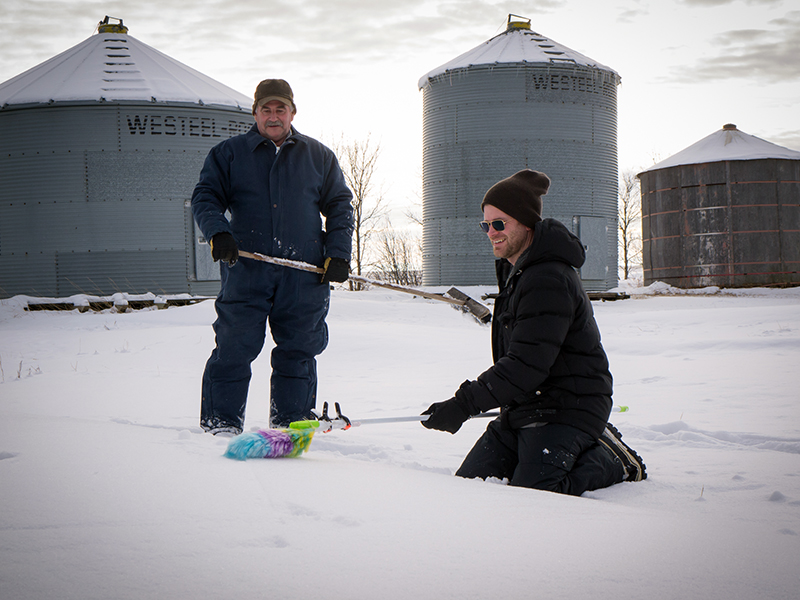 Another take means another butterfly impression in the snow, so out comes our Art Director Dan with his feather duster. The snow in the finished video might be cold, but it won't be dusty. 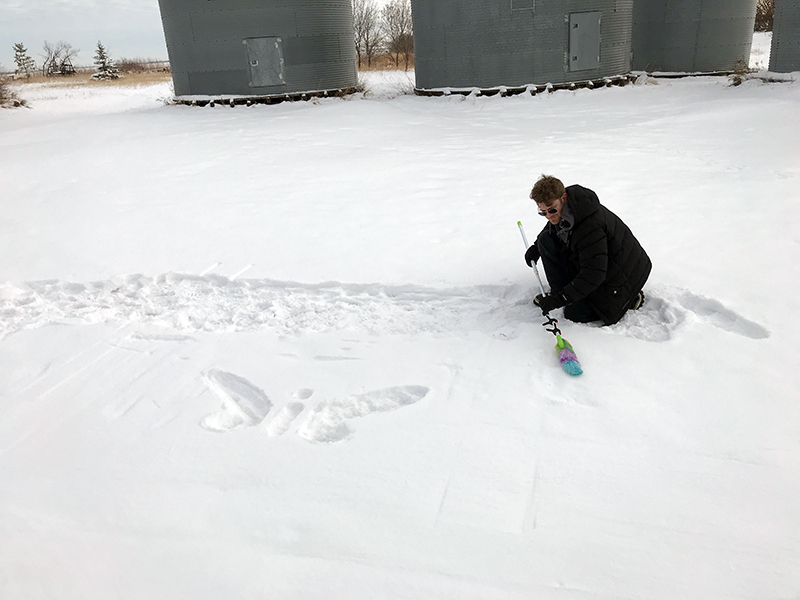 As Dan continues smoothing out the snow with his feather duster, here's a good look at a completed Innovation Credit Union butterfly logo in the snow.

By the end of the shoot, Dan wisely observed that he had become a black-belt master in the art of creating snow butterflies...a skill which he will probably never ever use again. Still, it will make for an interesting line on his resume. 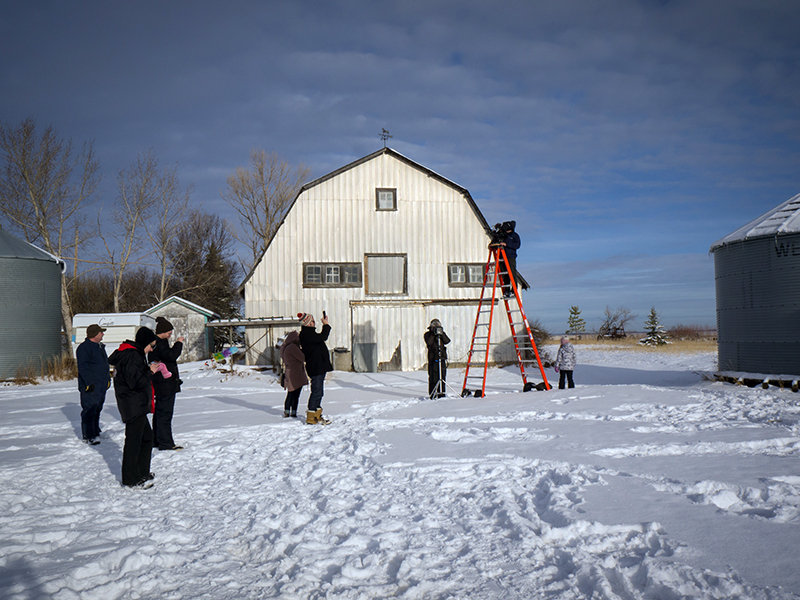 With clients and crew members gathered nearby, Director Stephen and DOP Jason shoot another take with our actor, Suki. 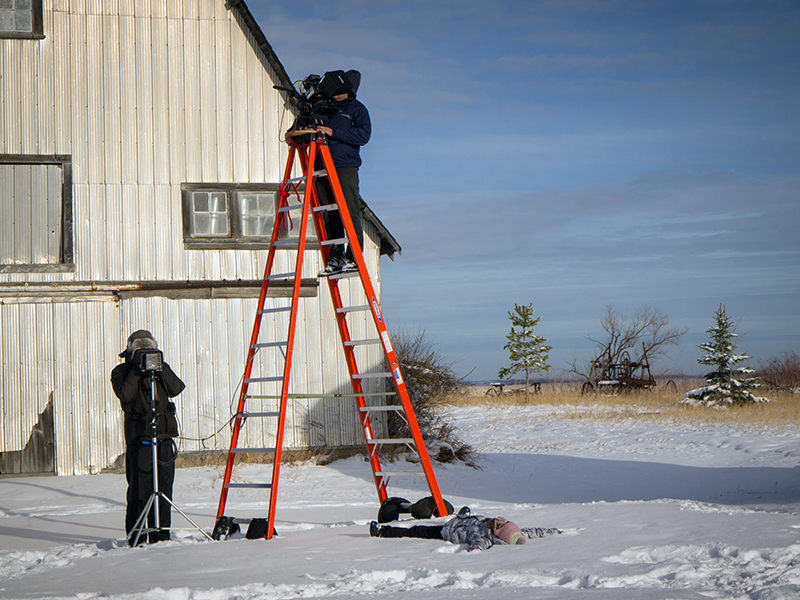 We wonder what is going through our young actor's mind at this point. It could be "Hey, cool, I get to make snow angels on camera!" Or it could be "Couldn't we have shot this on a warm sound stage and just put in computer-animated snow?" 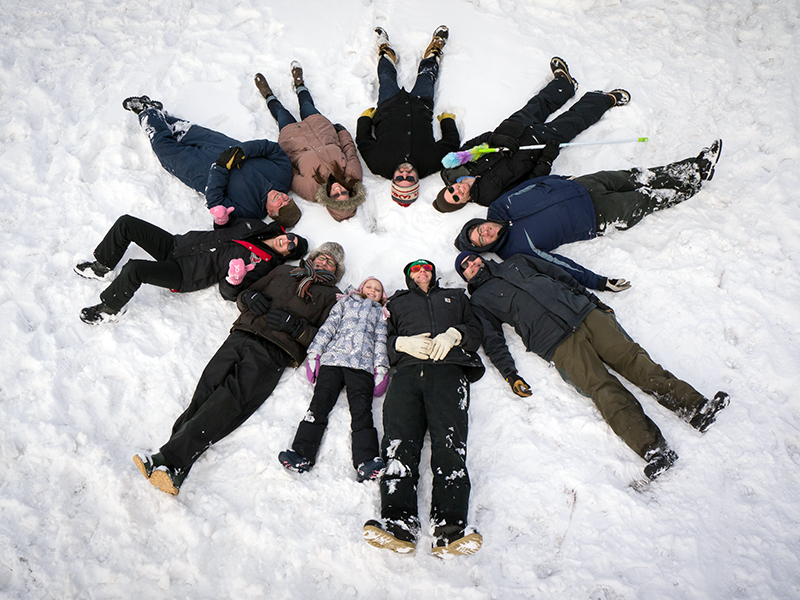 And, just so Suki didn't have to face the snow alone, the clients and crew decided to form some kind of snow flower. That's a cool (literally) team. 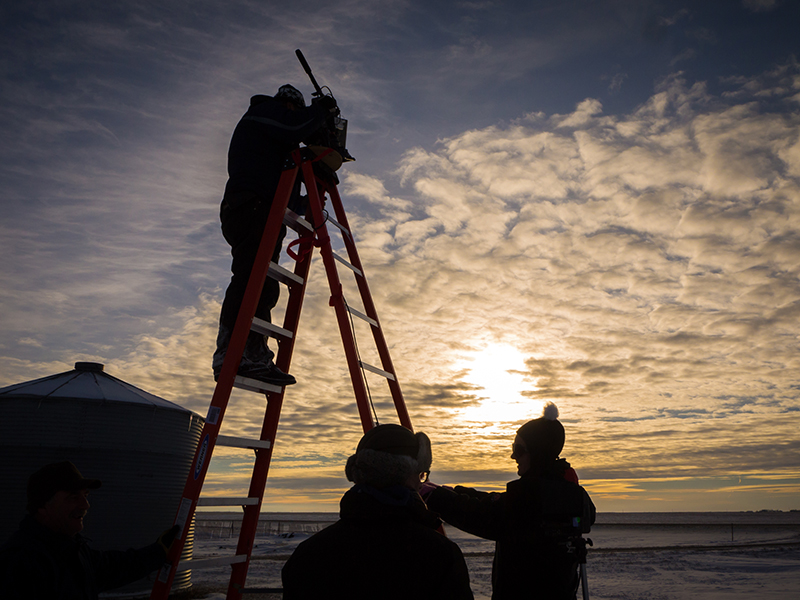 As the winter sunlight fades on a full day of shooting, we'll leave you with a few freeze-frame images from the finished Innovation Credit Union holiday video tag. 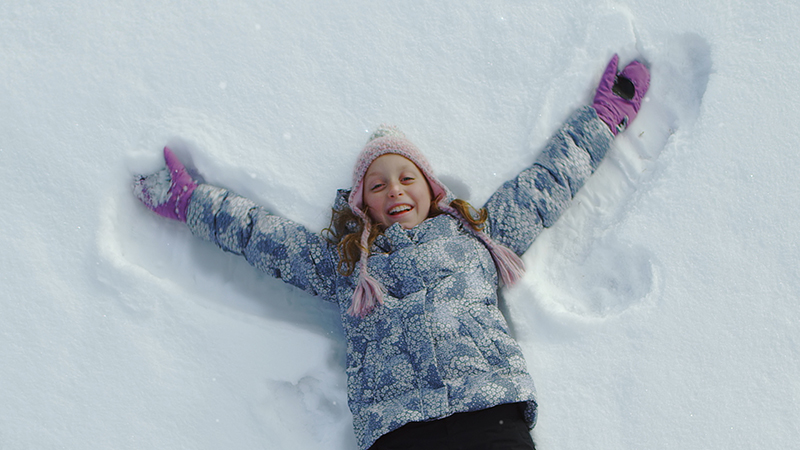 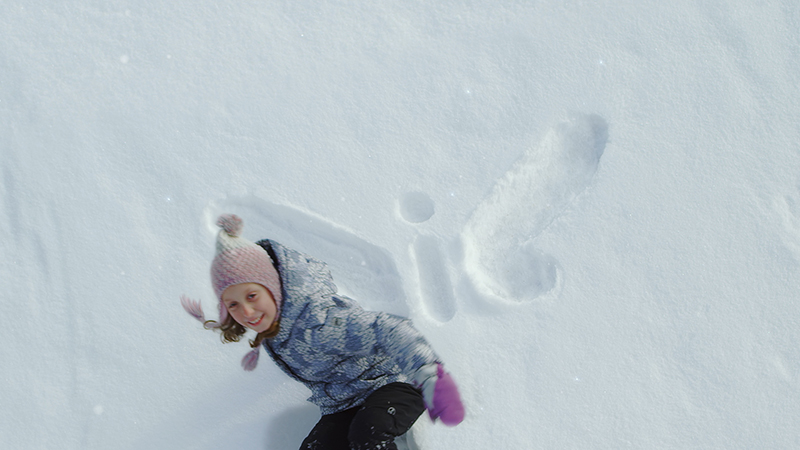 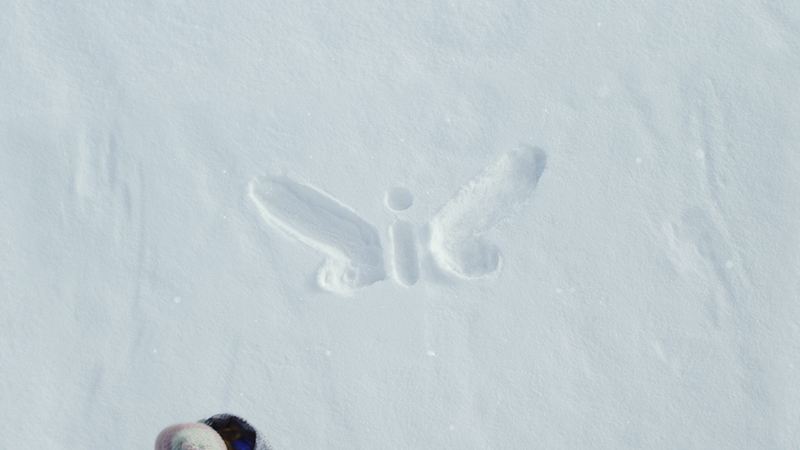 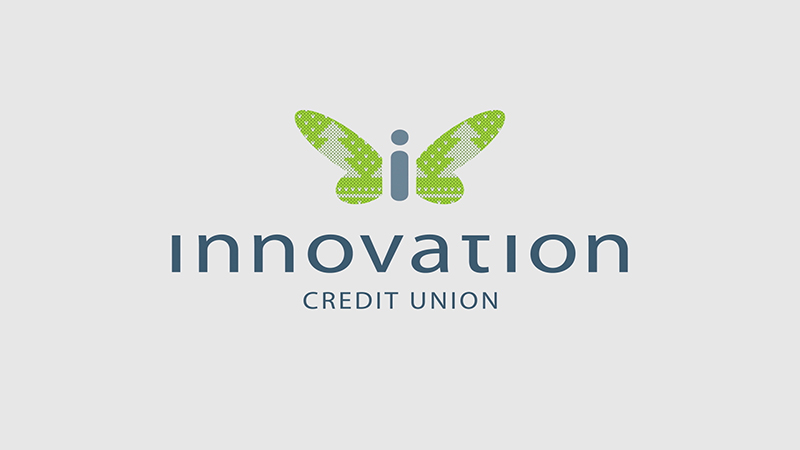 For the final image of the video, Java Post created two different versions of the Innovation Credit Union logo. The first version, seen above, uses a "knitted Christmas sweater" texture in the butterfly's wings. The second version, seen below, uses the solid green colour. 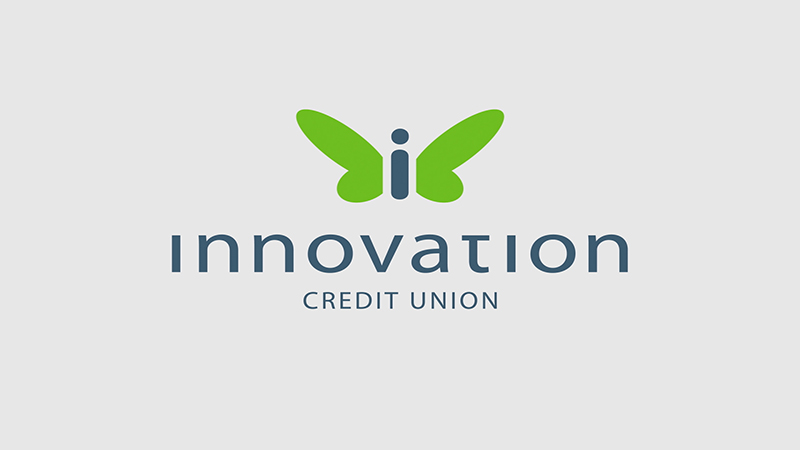