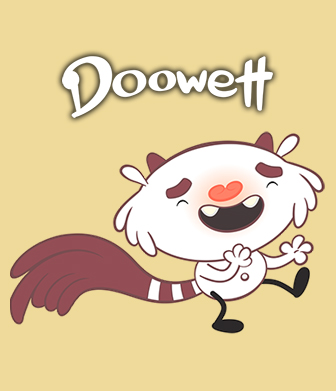 Java Post Production animators Kevin Drysdale and Tomás Ibar (seen below) have been busy the past few weeks animating some episodes of the Rogers / City TV children's show Doowett. Designed to teach preschool-age kids about discovery, cooperation, and music, Doowett is the brainchild of Regina, Saskatchewan animator, Adrian Dean, with music by Vancouver's Andrea Carlson.

Doowett is a curious creature amazed by snowflakes, thrilled by kites and obsessed with splashing in puddles. Though his adventures seem small, he gets big satisfaction from sharing his world with his monster friends. Doowett and his friends do not talk. Each character’s emotions are expressed by musical sounds and when they harmonize, they create a charming duet the length of each two-minute short.

Creative talent runs in the Dean family, as Adrian's brother Lowell Dean is the writer and director of the cult hit horror/comedy feature film, WolfCop, for which Java Post provided aerial photography. "It's funny that both of our projects right now involve furry monsters," says Adrian,"but they're very different types of characters."

The first season of Doowett - 16 x 2-minute episodes - was animated entirely by Adrian. However, as the show enters it's second season, Adrian has asked Java Post to take on some of the workload and animate a few of the episodes.

Doowett and his friends can been seen on City TV, and episodes can also be viewed online at the show's website: www.Doowett.com

This particular scene being animated involves Doowett (on the left) and his animated friend Gustoso (on the right). The non-animated and entirely three-dimension Tomás is in the foreground.

In this close-up of the computer screen, you can see one of the storyboard images which outline basic key moments in each program.

For the record, our animator Tomás does not have a big fluffy tail. At least, not that we know of. Tomás does have a big smile, though.