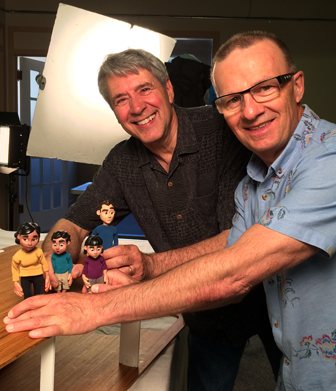 Clark is the President and Executive Producer of Westwind Pictures, a production company he co-founded in 1989, right here in Saskatchewan. Now headquartered in Ancaster, Ontario, Westwind Pictures productions have aired in more than 90 countries, broadcast in 20 languages.

What brought Clark back to Regina to work with his long-time friend (you notice we didn't say "old?"), "Java Jack" Tunnicliffe, was an idea sparked by, of all things, a child's dollhouse.

"The genesis of the project was a family affair," explains Clark. "My daughter Avah wanted a dollhouse. But after seeing the cheap quality of some of the commercially-available ones, I thought that I could do a better job making one from scratch. After completing the house, I began getting requests from the parents of my children's friends, asking if I could make one for them, too.

Well, I never did make dollhouses for the neighbours. But, while watching the different ways the kids would play with the house and how they would pretend it was far more than just a plain old house, my business partner and wife, Mary Darling, thought there was a show idea here: a concept for a children's television program that would centre around the occupants of this unique little place, which - thanks to their imagination - is so much more than just a regular house. And the Imagistation was born.

The family connection extended to the actual design and custom construction of the Imagistation itself. Son Kyle turned the initial house design into plans,  engineered a special 3D-printed clip system to hold the structure together, integrated an electrical system into the house, and also designed custom furniture for the Imagistation's decor.

With the structure and characters now complete, and needing to shoot some scenes for a short promotional episode, Clark packed up the house and its cast of custom-made characters (they're much too cool to call them "dolls") and flew out to Java Post, where he and Jack spent a couple of days creating scenes for the promotional video of the Imagistation. 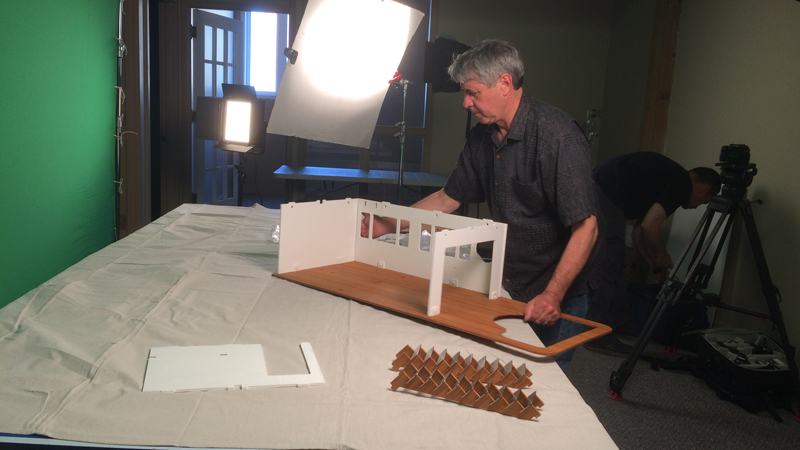 With the various Imagistation pieces unpacked from the flight from Toronto to Regina, it's time for Clark to begin reassembling the house. Is a house considered carry-on? "Do you have anything to declare, sir?" "Yes, a house." 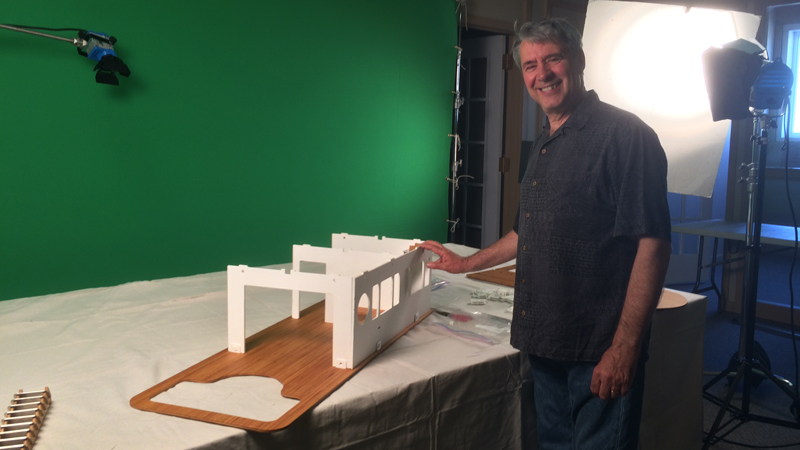 Clark has a reason to look pleased. It's not every guy who can construct a house all by himself in just one afternoon. Mind you, in the world of the Imagistation, there's no delay waiting for building permits. 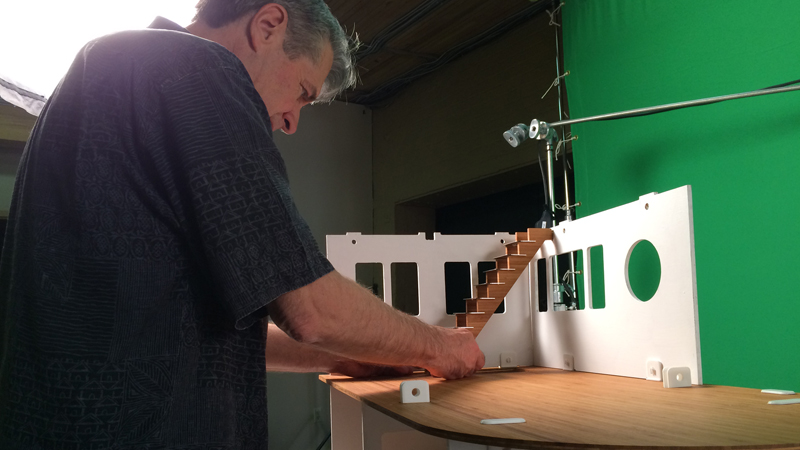 Here we see the stairs going up. Or possibly going down. One can never tell with stairs. 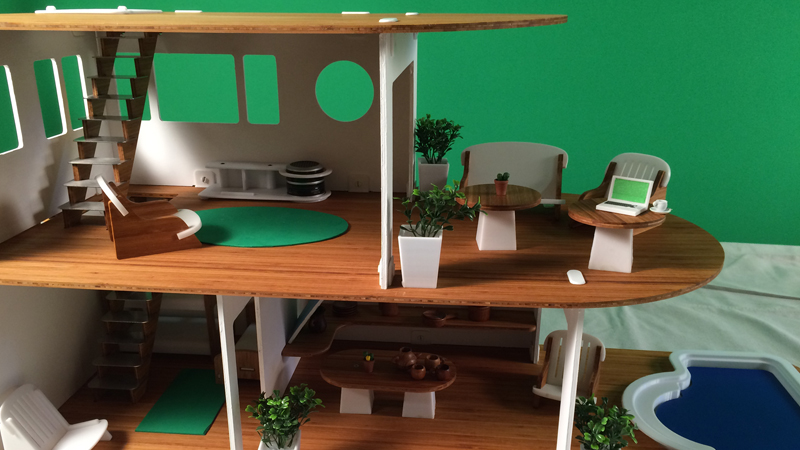 Custom-made furniture and accessories go in next. All the Imagistation needs now are some occupants. 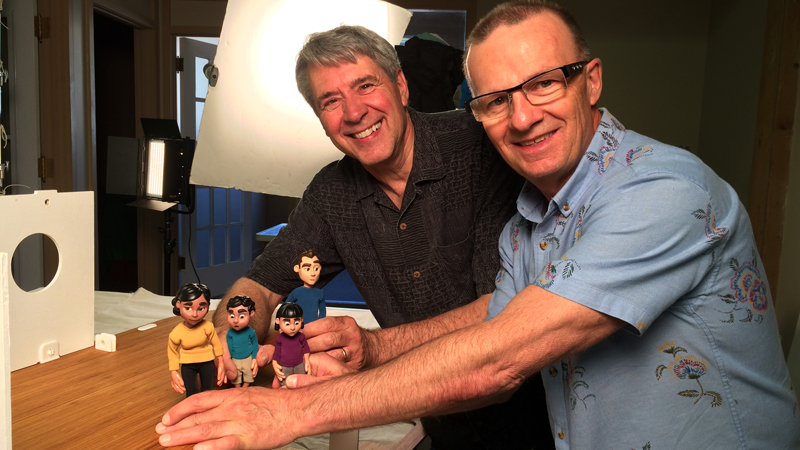 And, as if on cue, here are the occupants. No, not Clark and Jack. They're just the hired help. 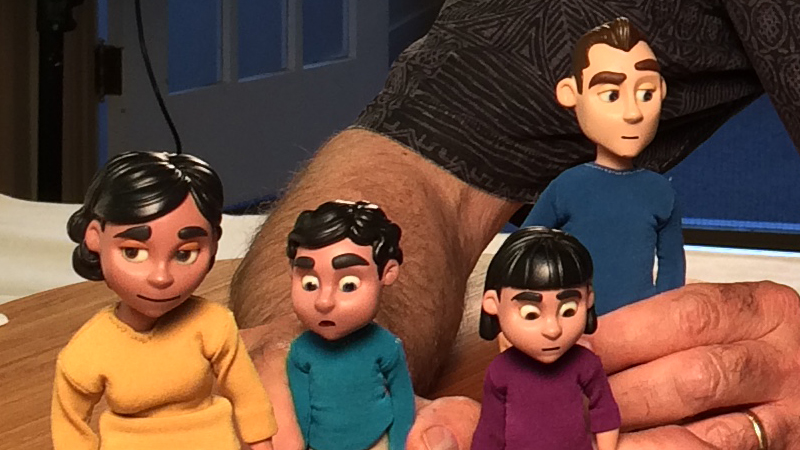 Allow us to introduce our Imagistation occupants. They can be quite a handful. Get it? A "hand full." Oh, never mind. 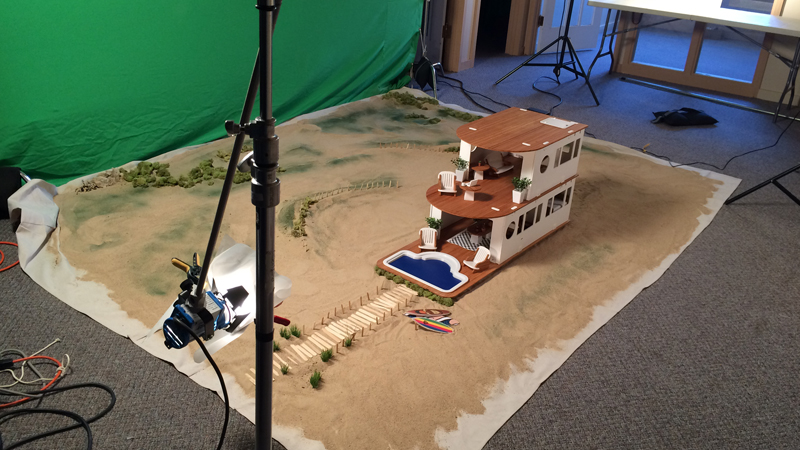 Skipping past all the hours of set-up, here is our house in its beach environment, complete with foliage, a rustic boardwalk, and some surfboards. A deep blue ocean and sunny blue skies will be added in the visual FX suite. 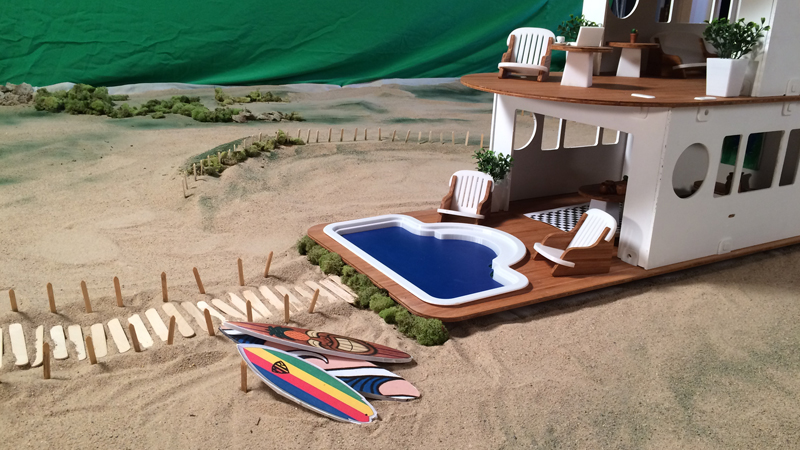 A closer look at the beach environment. From this lower angle, the beach and plants in the distance start to take on a more believable appearance. 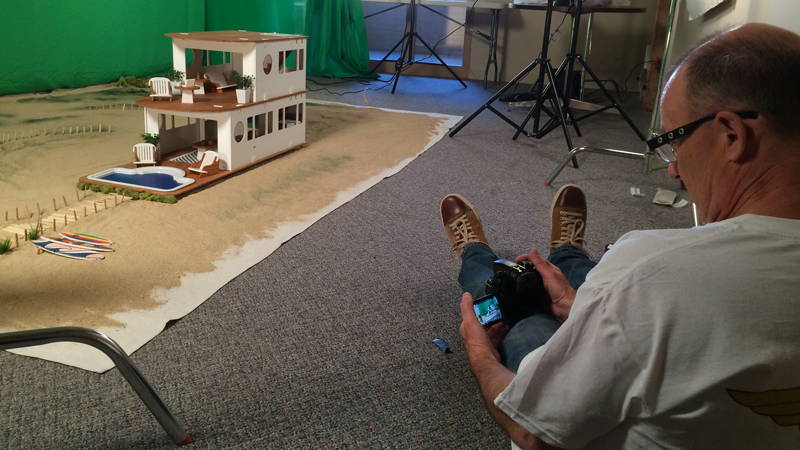 Here's Jack getting a low-angle camera shot of the house and beach, which he will later insert into previously-shot footage of our characters. 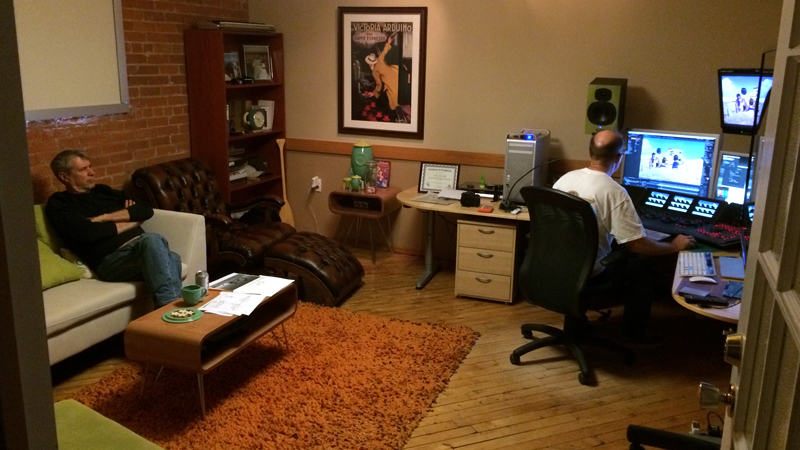 Back in Jack's production suite, he and Clark start the visual FX work on the Imagistation promotional video. 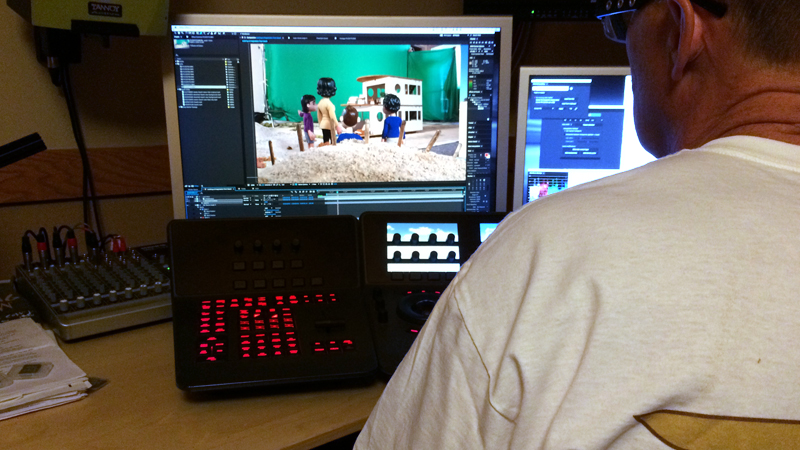 Jack places the low angle shot he just took of the house in the background of a previously-shot image of our characters. 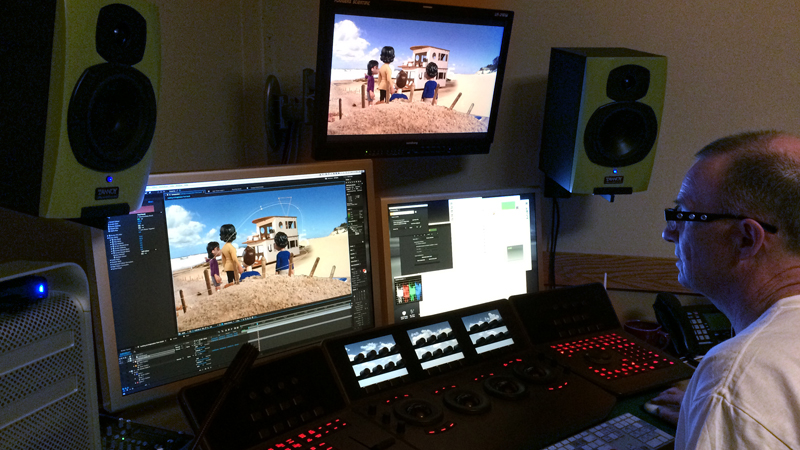 The green-screen background is then replaced with an image of a sun-kissed beach. 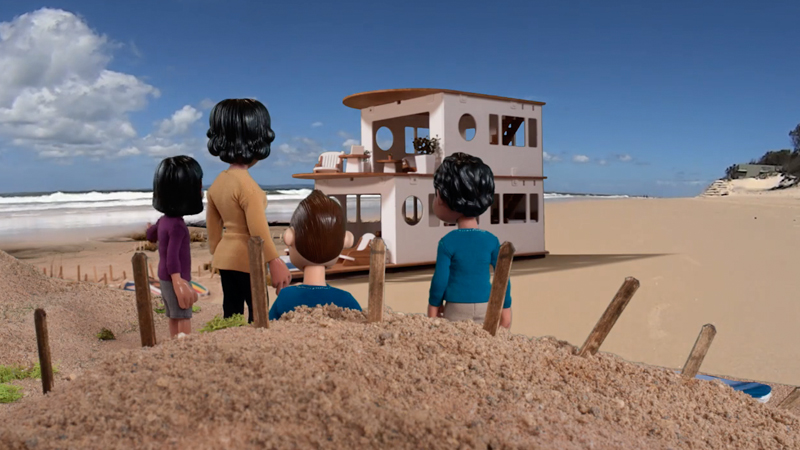 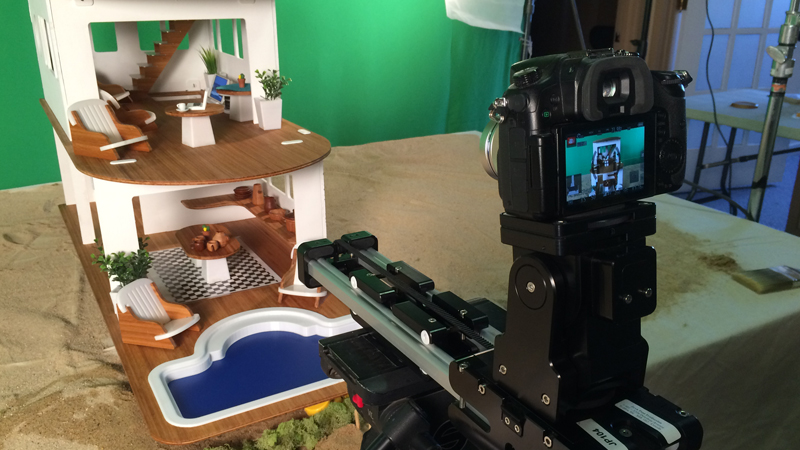 Back on set, all ready for a close-up shot using our motorized camera slider, which is a perfect piece of technical gear for close-up work like this. 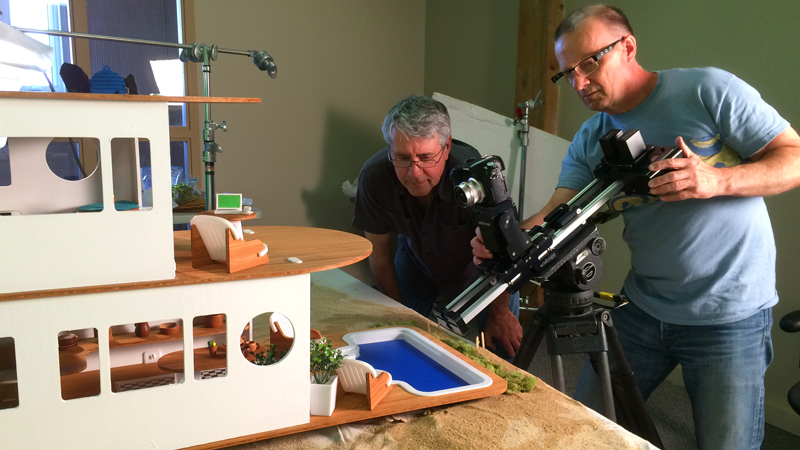 Here we see Clark and Jack concentrating intensely on the shot. 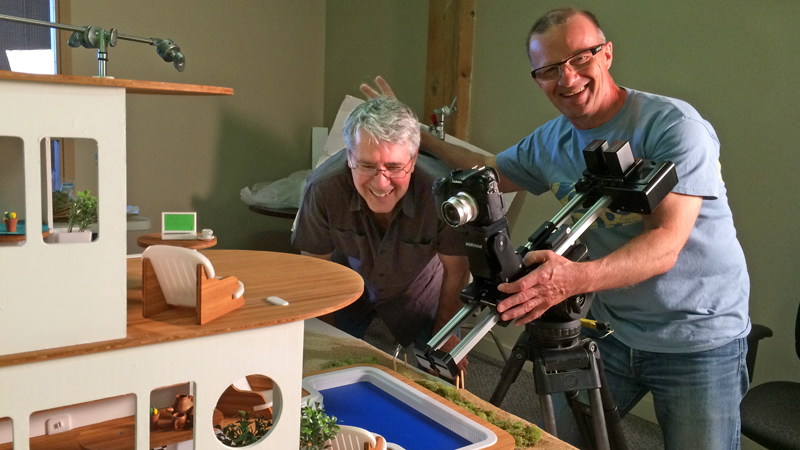 Well, so much for intense concentration. Okay, you two. Get back to work. 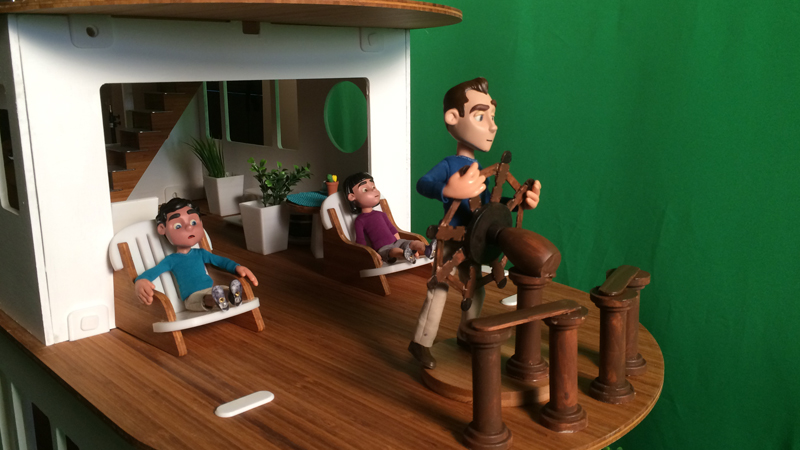 With a little imagination, it looks like our characters have transformed the Imagistation into a sailing ship, with Dad at the helm. To skirt around a lengthy legal battle, let's just call them the "Pirates of the Cari-green-screen." 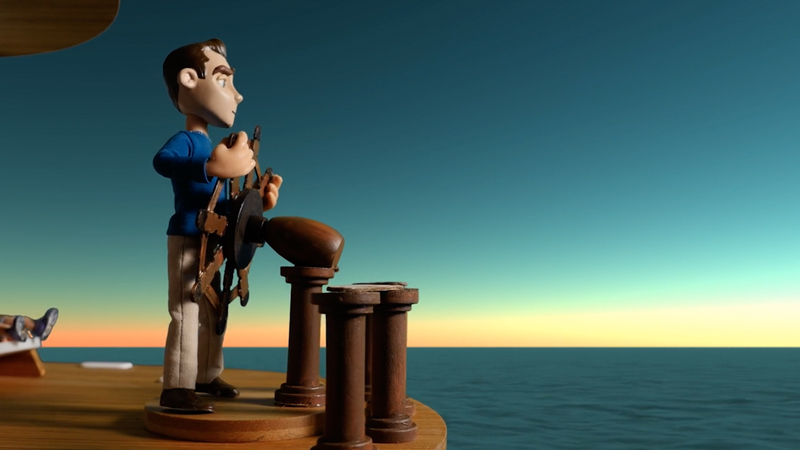 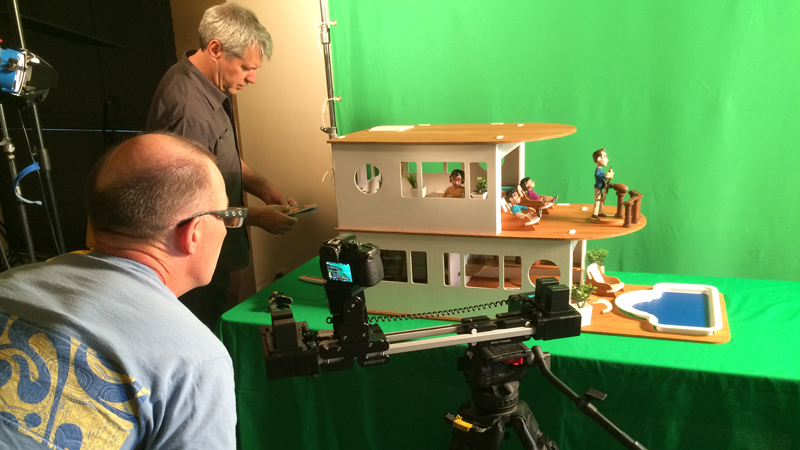 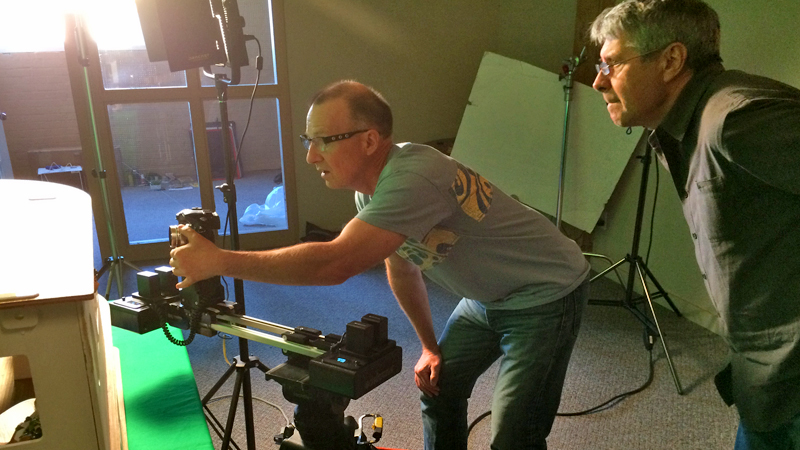 Double check the focus, hit the record button, and another shot for this pilot project will be "in the can," as they say. Of course, since no one uses film cans anymore, we guess we should say the shot will be "on the card." 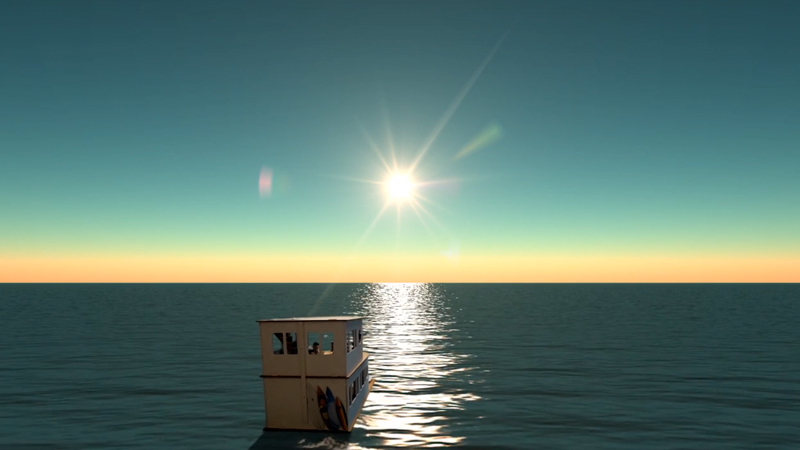 And as the sun sets on the ocean's horizon, our cast of characters and their amazingly versatile Imagistation slowly sail off into the distance. Who knows what adventures they will discover there? As they say on TV shows: "Stay tuned."