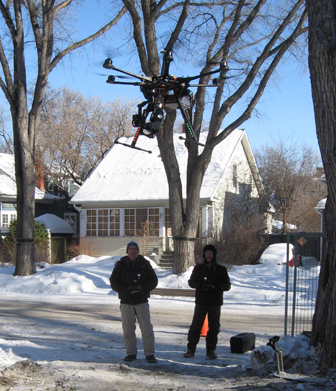 Despite the currentl frigid weather in Regina, the Java Post Aerial Photography crew took to the air in a residential Regina neighbourhood earlier this week to document a project for Failsafe House Lifting. As you might guess from their business name, Failsafe House Lifting specializes, obviously, in lifting houses.

Java Post flight supervisor Ted Delanghe cleared our proposed flight plan through the Regina airport tower, to ensure we would have a safe airspace in which to operate the Javacopter aerial camera platform. On this particular project, the Javacopter would be operating up to a maximum altitude of 300 feet. Not that the house was going to be lifted that high, you understand, although wouldn't that be something?

Click on the "Watch" button to view a brief montage of shots that were taken for this project. At approximately 00:40 to 00:55 seconds into the video you'll also see a "fisheye" wide angle shot taken with our hand-held Steadi-arm camera mount.

The shot that appears from 00:56 to 01:25 demonstrates the remarkable ability we have to utilize the Javacopter aerial camera platform as, essentially, a low-flying camera dolly, gliding down a city street underneath tree branches overhead. That's a shot that you could never accomplish with a conventional helicopter and camera mount.

Below are a few stills of our shoot day for Failsafe House Lifting.

The Javacopter, ready for takeoff.

The Javacopter aerial photography platform begins to rise up the front of the house.

Image of the HD footage being recorded by the Javacopter as it ascends.

Reaching rooftop level, the camera stabilization system begins to tilt down, giving a bird's-eye view of the house.

Image of the Javacopter footage, looking down at the house.

Image of the surrounding neighbourhood, including the Saskatchewan Legislative Building and Wascana Lake, taken from the Javacopter aerial photography platform at an altitude of approximately 250 feet.