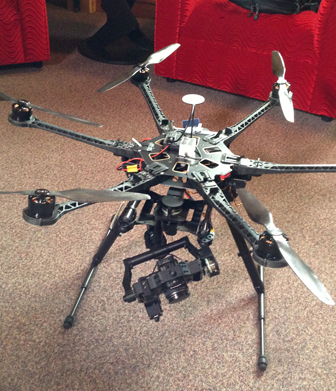 "Get to da choppah!"

As many sci-fi, action-movie fans will know, "Get to da choppah!" is a classic Arnold Schwarzenegger line from the movie "Predator." It helps to imagine Arnold saying it in his distinctive accent.

Well, Java Post is "getting to da choppah," too. We're assembling our remote control camera helicopter...or "HEXacopter" as it's called, because it has six separate rotor blades.

This unit will allow Java Post to capture smooth, stable Hi-Def images and take our clients' projects to new heights. (Get it? New "heights." Because it's a helicopter? Oh never mind.)

We can operate this unit in a self-stablizing mode with a single pilot/DOP or, using separate controllers, have a DOP concentrate on controlling the camera while the pilot focuses on flying the "choppah." Unlike some other types of remote camera 'copters, this unit features retractable landing gear, which gets them out of the way of the camera and allows for a clean 360-degree shooting field.

We're in the early stages of getting to know our new, hovering friend - the missle launchers are tricky to install, just FYI - and, as we take it out for test flights, we'll post the videos here.

While we're doing that, you need to start thinking about the projects you want to do and how cool they will look with some awesome aerial footage.

Watch for "Java Air" to take to the skies very soon.

Here's a photo of the main "bits" (pardon the technical jargon) under construction.

Here's one of the remote control modules. This will also open every car garage door in town and pick up Radio Free Europe.

Here's a shot of the hexagonal rotor assembly. Either that, or it's the most dangerous table centrepiece ever made.

And here's a shot of the assembled "Java Air." When we're not getting great aerial shots for clients, we're going to hunt down Bin Laden. What's that? Oh cripes. Okay, we'll spy on my neighbour, instead. I'm pretty sure he's stealing my crab apples.