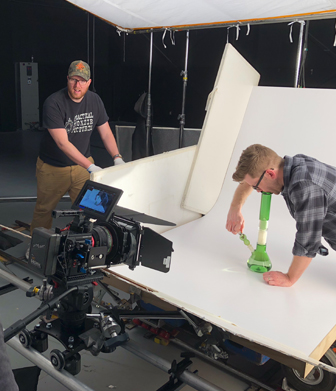 Behind the scenes with Java Post on the "Driving High" campaign for SGI. 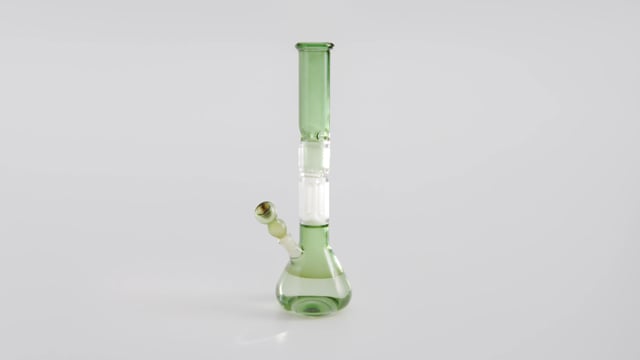 Java Post Production and director Stephen Hall worked with the team at Phoenix Group to create a series of three commercials for SGI's "Driving High" campaign.

Shot, edited, and posted in both horizontal and vertical versions (for viewing on conventional and mobile device screens, respectively), the campaign explains that, whether someone is impaired by alcohol or prescription drugs or recreational drugs, impaired driving is still impaired driving. In other words, "driving high equals D.U.I."

Though the finished commercials look quite simple and straightforward, in order to achieve the effect we wanted, there was much more work involved behind the scenes than the average viewer might think. Let's take a look. 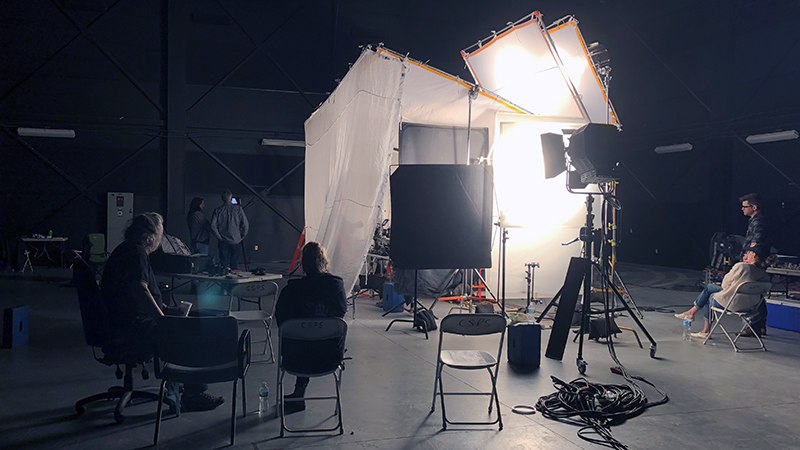 The commercials were shot at the Canada Saskatchewan Production Studios in Regina. The large controlled studio space gave Java Post Production and director Stephen Hall lots of elbow room in which to properly build and light a custom table-top set. 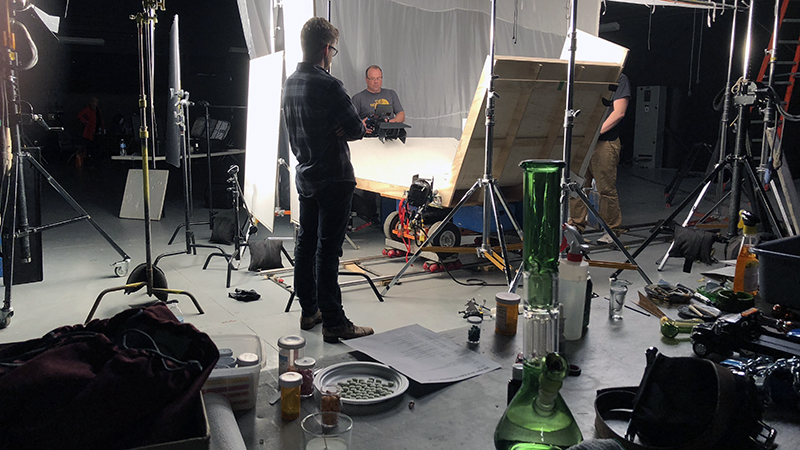 We also had lots of room to gather all the various booze and drug paraphernalia that we needed. (And that was just for the crew! Ba-Dum-Chick! We're KIDDING! ) 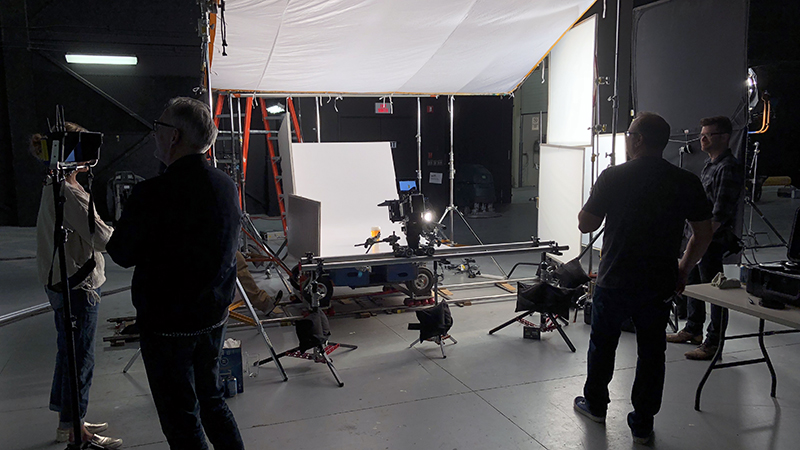 In the commercial (watch an example HERE), various pieces of alcohol and drug paraphernalia move from off-screen into the camera's view, almost like they were moving on a conveyor belt that would temporarily stop in front of the camera before moving away again.

One way to accomplish this would be to just shoot static, center-framed shots of each item and then electronically "move" them on and off-screen in the edit suite.

The problem with only using that technique is that the items are not physically showing the effects of movement (wine sloshing in a glass, pills rolling on a table) that they would if they were actually in motion. And we wanted that realism. So, we created a custom table-top set mounted onto a dolly system that connected the set to the camera and could physically move the entire rig simultaneously. 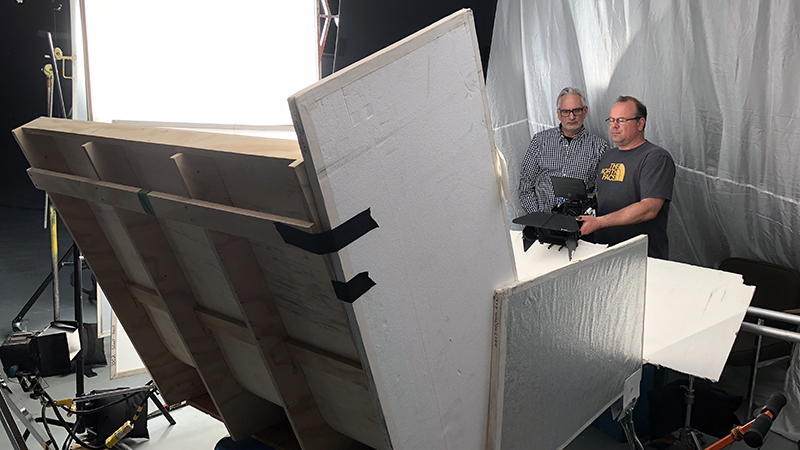 Above, director Stephen Hall (left) and director of photography Greg Huszar check out a shot. We're seeing the back of our tabletop set, which has several white and silver light-reflecting "bounce boards" taped to its sides. 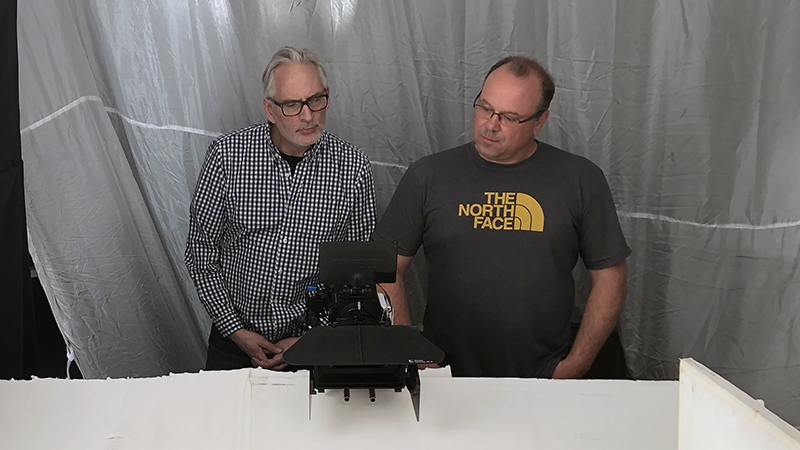 Stephen and Greg look pretty intense as they line up the framing on a shot. They should relax with a drink or some drugs. Fortunately, we've got lots around the set. Unfortunately, it's all mock/fake stuff. 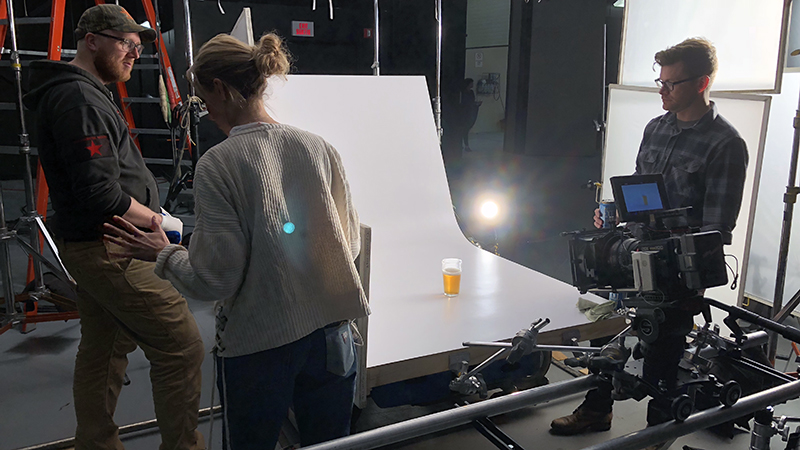 Above we see some of the crew setting up for a shot involving a pint of beer. 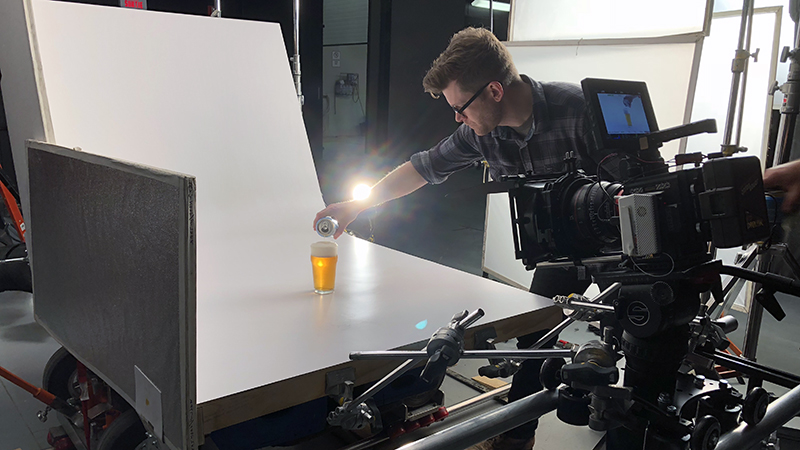 Jack-of-all-trades Dan Crozier tops up the glass with beer. Non-alcoholic beer, actually, but the camera doesn't know that. 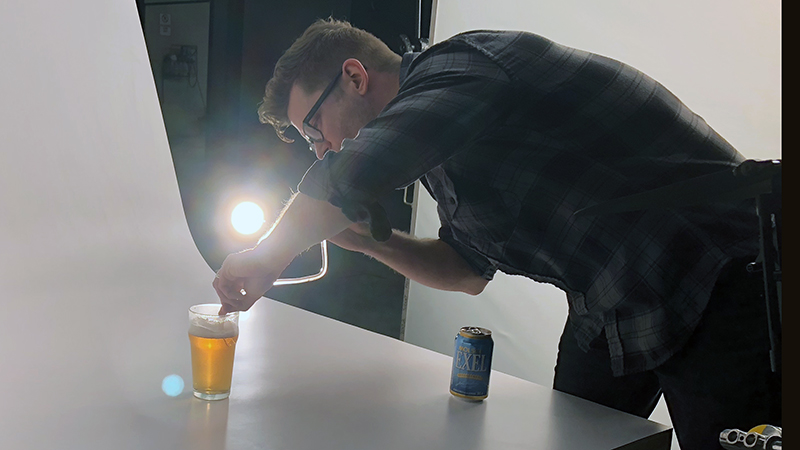 To get the beer ready for its close-up, Dan uses a plastic tube to blow air into the liquid, creating that perfect head of suds on the beer. You don't want your local bartender to do this to your drink, but it's okay when shooting a commercial. 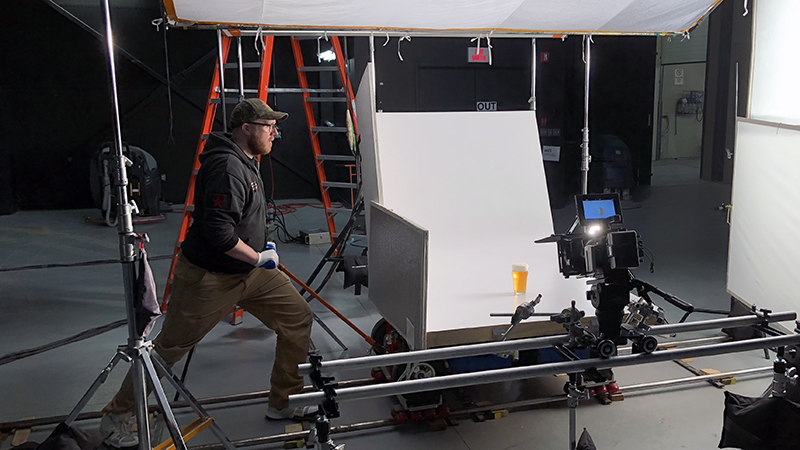 The dolly grip physically rolls the connected set and camera rig (along with the pint of beer). And, because the glass is actually in physical motion, the liquid will slosh around in the glass just the way it should. Plus the beer glass is always framed correctly in the camera. 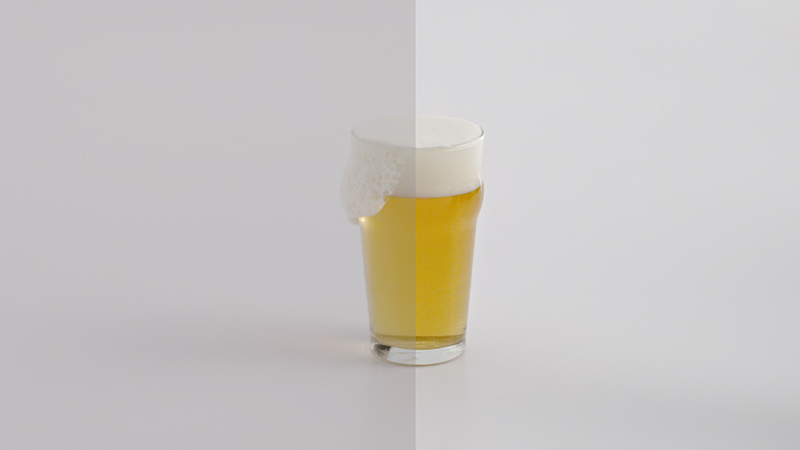 Later, in the colour correction phase, Java Post Production colourist Jack Tunnicliffe will tweak the colour, tone, and contrast of the shot to make the beer look extra...well, "beer-y." The raw camera shot is on the left above, and the colour corrected version is on the right. 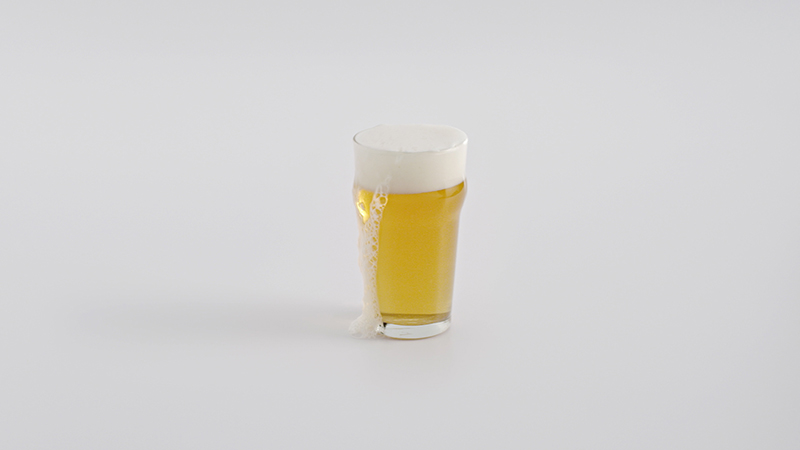 And here is what the finished shot looks like in the commercial. 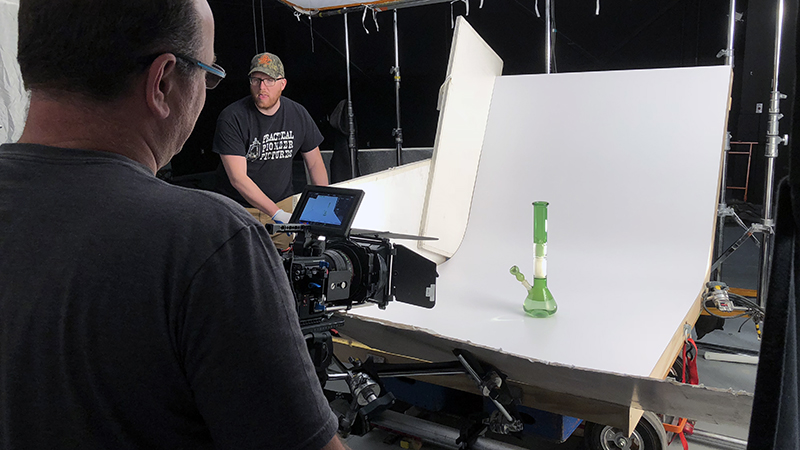 Moving on to another piece of impairment paraphernalia ("impair-aphernalia?"), the crew gets a glass marijuana bong set up on our table-top. 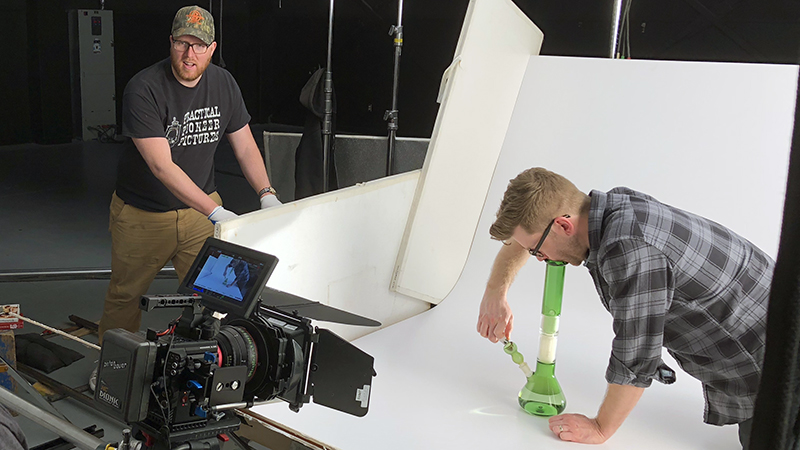 Once again, Dan throws himself on the impairment grenade, so to speak. Only, this time, he's creating clouds of smoke inside the bong (non-marijuana smoke, we assure you). All for the sake of photo-realism. 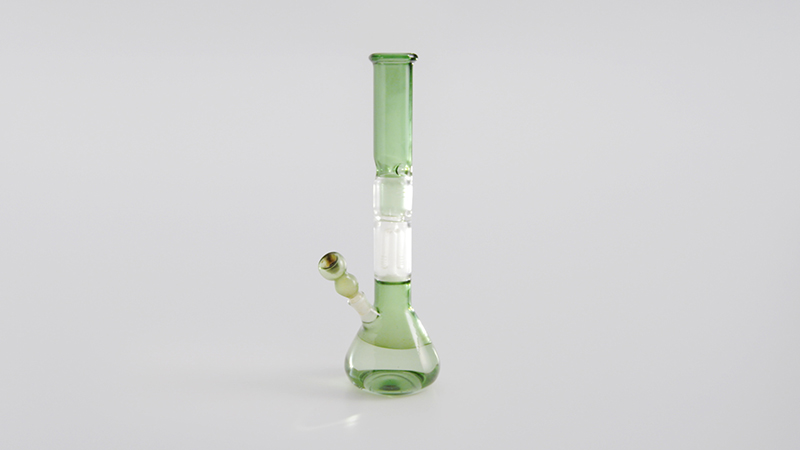 And here you see the bong shot from the finished commercial. You can see the wisps of smoke billowing up the top of the green glass tube.

So, those were a few behind-the-scenes shots of the Java Post Production crew creating the new "Driving High" campaign for SGI.