Behind the scenes on the Java Post shoot for Tourism Saskatchewan Part 2. 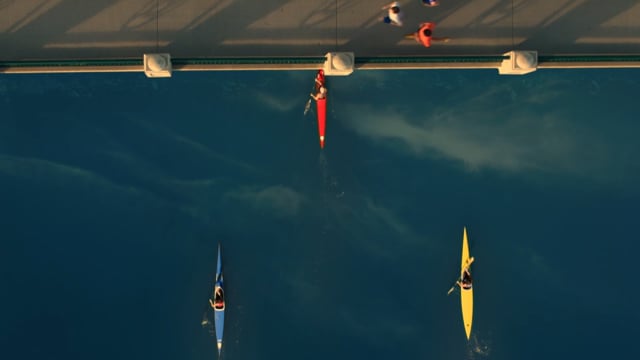 Java Post Production and Java Post Aerial Photography were pleased to work with the Phoenix Group to create the 2017 television and web campaign for Tourism Saskatchewan. The campaign consists of a 60-second commercial (seen here) as well as a 30-second version and several 15-second pre-roll versions for the web.

Here are a few MORE behind-the-scenes photos of our crew capturing shots of joggers on a bridge in the city of Saskatoon.

Co-director and co-photographer Derek Frankowski, all geared up with a stabilized hand-held camera rig.

For this particular scene, Derek will run alongside a group of three joggers as they cross over the bridge. Directly behind Derek, you can see his co-director and co-photographer Greg Huszar (in blue plaid shirt) bent over the remote controls for the camera.

The jogging begins, with Greg and Derek following behind.

This is what the shot looks like in the finished commercial.

For a different angle on our joggers, Derek uses the handheld camera rig while standing up through the sunroof of a crew vehicle.

And, as the sun slowly sets on our actors and Java Post Production crew, we bid a fond farewell to this behind-the-scenes look at our shoot for Tourism Saskatchewan.